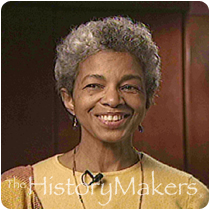 Favorite Color:
Gray, Purple, Red, Yellow
Favorite Food:
Ice Cream
Favorite Time of Year:
Fall
Favorite Quote:
Don't Do To Others What You Don't Want Done To You. What Goes Around, Comes Around.

Favorite Color:
Gray, Purple, Red, Yellow
Favorite Food:
Ice Cream
Favorite Time of Year:
Fall
Favorite Quote:
Don't Do To Others What You Don't Want Done To You. What Goes Around, Comes Around.

See how S. Pearl Sharp is related to other HistoryMakers

Writer, actor and filmmaker Saundra Pearl Sharp was born on December 21, 1942 in Cleveland, Ohio to Clarence and Faythe Sharp. Sharp’s family was active in the local NAACP, and she was raised in Antioch Baptist Church. Sharp graduated from John Adams High School in 1960, and attended Bowling Green State University, where she pursued a double major in music education and radio-TV production. She became the first Black member of the BGSU chapter of Pi Kappa Lambda, the music honor society, and produced a children’s story series and music interviews on the campus radio station. During the summer, Sharp interned at WABQ-AM in Cleveland, under the tutelage of Valena Minor Williams, LeBaron Taylor and Jack Gibson.

Graduating in 1964, Sharp moved to New York City, where her first job was as a copywriter for T.V. Guide. She studied acting under the Poverty Program’s HARYOU-ACT with Cleveland’s Karamu Theatre alumni Al Fann and Minnie Gentry. She performed in J.E. Franklin’s Black Girl, in the chorus of the Pearl Bailey company of Hello Dolly from 1967 to 1968, Uniworld’s radio serial Sounds Of The City, and in Gordon Parks’ film, The Learning Tree. Sharp also starred in the TV movies Minstrel Man (1976) and Hollow Image (1980), had recurring roles on Wonder Woman (1978), St. Elsewhere (1984/87) and Knots Landing (1985), and was a leading commercial spokeswoman.

A poet from childhood, Sharp attended John O. Killens’ Writers Workshop at Columbia University where she completed two volumes of poetry and her first play, The Sistuhs, in addition to forming the literary performance troupe Poets & Performers.
In the mid-1970’s Sharp moved to Los Angeles. She created Poets Pay Rent, Too, and served as publisher/editor of Robert E. Price’s Blood Lines (1978), Directory of Black Film/TV Technicians and Artists, West Coast (1980), The BAD-C (Black Anti-Defamation Coalition) Media Matters Newsletter (1981-84) and The Black History Film List (1989). Publisher Glenn Thompson re-issued her 1978 poetry volume Soft Song (1978, 1991) and published Typing in the Dark (Harlem River Press, 1991) and the non-fiction Black Women for Beginners (Writers & Readers, 1993). Sharp was a co-founder, with Robert E. Price, of the Black Anti-Defamation Coalition which monitored the image of Blacks in the media (1980-85).

Sharp was an essayist and commentator on NPR from 2003 to 2009, and has served as a volunteer segment producer for KPFK-FM, Pacifica Radio Network. Her non-fiction writings are collected in The Evening News- Essays And Commentaries From NPR And Other Clouds (2015).

S. Pearl Sharp was interviewed for The HistoryMakers on April 27, 2005.

See how S. Pearl Sharp is related to other HistoryMakers
Click Here To Explore The Archive Today!