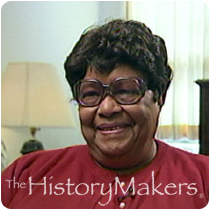 See how Ruth Wells is related to other HistoryMakers
Donate Now

Community leader Ruth Wells was born on August 1, 1934, to Mettie Johnson and George Darnell, in West Point, Mississippi. Wells attended Cola Springs School, Cedar Grove School, and Lamont County Training School in Caledonia, Mississippi . At thirteen, she moved to Gary, Indiana, and attended Theodore Roosevelt High School. By 1950, Wells had dropped out of school to work for the Standard Oil Company in Whiting, Indiana. In 1952, she married James "Ira" Wells and in 1959 she began working for Chicago’s 3M Company. The Wells bought a home on land contract, where they fell victim to Chicago realtors known as “panic peddlers.”

In 1968, when her West Side home insurance rates rivaled those of Chicago’s North Shore residents, Wells confronted the realtors head on. Father James Egan (the late Monsignor Egan) introduced her to Father Jack Macnamara, a young Jesuit organizer whose resources honed Wells' leadership skills. She became the voice of hundreds of African American homebuyers who formed the Contract Buyers League (CBL). Civil rights attorney, Robert Ming, and pro bono attorneys from the law firm of Jenner & Block filed a lawsuit, and by 1972, most of the unethical “contracts” were converted to mortgages.

In 1972, Wells was recruited by Mary Powers to join Citizens’ Alert, a criminal justice watch organization. There, she organized citizens and confronted powerful figures like Chicago Police Superintendent James Rochford and City Personnel Director Cahill. In 1976, she was hired as an Information Officer by the Office of the Village Clerk of Oak Park, where she retired in 1990.

Ruth Wells was interviewed by the HistoryMakers on January 15, 2004.

See how Ruth Wells is related to other HistoryMakers
Donate Now
Click Here To Explore The Archive Today!