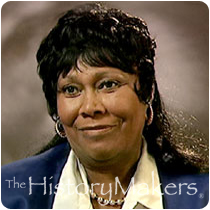 See how Ruth Love is related to other HistoryMakers

Eminent educator Ruth Love was born on April 22, 1939 in Lawton, Oklahoma. As a child, Love's favorite game was playing school. One does not have to delve deeply into Love's family tree to uncover the roots of her passion for education. Her grandfather Andrew A. Williams, a former slave, founded Lawton's first school for African Americans. Williams' achievements instilled in Love a passion for reading, which she parlayed into a lifelong educational career. Love received her B.A. in Education in 1954 from San Jose University. She went on to receive her M.A. in Guidance and Counseling from San Francisco State University in 1961. In 1971, Love was awarded her Ph.D. in Human Behavior and Psychology from the United States International University, San Diego.

Love began her career in education as a teacher in the Oakland Public Schools. In conjunction with her duties, Love immersed herself in numerous educational projects taking her across the globe to Ghana and England as a Fulbright Exchange Educator. Love assisted in drafting important education legislation, specifically the National Reading Act. She accepted an appointment as Director of the National Right to Read Program. After four years with the program, she took a position as the Superintendent of Schools in the Oakland Unified School District. During her seven-year tenure as Superintendent, she made an indelible mark on the Oakland School system. Two of Love's programs "Scholars and Artists" and "Face the Students" brought such African Americans of achievement as Alex Haley, Maya Angelou, James Baldwin and Coretta Scott King to motivate and inform students. Love was then the first woman recruited to head up Chicago's Public School system.

Love is the founder and president of RBL Enterprises, LTD., an educational consulting company. She has also authored several articles and books including Hello World (1975) and continues to teach courses in Education Administration at San Francisco State University as well as speaking and lecturing to educational leaders around the world. Her audiences are global, but her professional interests remain local. She continues to strive for the reform and improvement of education in urban American schools.

See how Ruth Love is related to other HistoryMakers
Click Here To Explore The Archive Today!