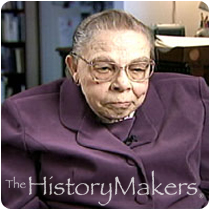 See how Ruth Brett Quarles is related to other HistoryMakers

Ruth Brett Quarles devoted her life to working with others. Born November 23, 1914 in Winton, North Carolina, as the second of seven children, her mother was a homemaker and her father, an independent farmer. After graduating as valedictorian of her high school class, Quarles attended Shaw University, where she earned her A.B. in 1935 and graduated the top of her class. She earned her M.A. from the Hartford Seminary Foundation the following year, and later returned to school, earning an Ed.D. from Columbia University in 1945.

Quarles began her professional career in 1936 as assistant to the dean of women at Spelman College. In 1938, she became the dean of women at Dillard University, and in 1942, the dean of students at Bennett College. In 1944, she took a position as the associate personnel director at Tuskegee Institute, and in 1949, she became a volunteer with the American Friends Service Committee at the University of Munich, where she worked with displaced German refugees in the aftermath of World War II. Quarles was named the dean of students at Fisk University in 1951, and in 1956, she went to Morgan State University, where she remained until her retirement in 1980. While at Morgan State, she held a variety of posts, including serving as the coordinator of student personnel services and the director of counseling and academic advising.

Quarles’ career involvement included being the first African American to sit on the Commission on Education of Women, as well as serving on the national board of directors of the YWCA of America and the National Association of Women Deans and Counselors (NAWDAC). In 1982, NAWDAC sponsored the Ruth Brett Symposium at the University of Maryland to celebrate her long career and dedication to service. Quarles has been listed in Who’s Who Among American Women, Who’s Who Among Black Americans and Who’s Who Among American College and University Administrators. She was married to the late historian and scholar Benjamin A. Quarles, who passed away in 1996.

Quarles was interviewed by The HistoryMakers on November 11, 2003.

See how Ruth Brett Quarles is related to other HistoryMakers
Click Here To Explore The Archive Today!