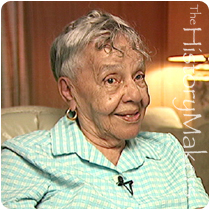 Publisher Ruth Mosselle Apilado was born in Chicago, Illinois on April 30, 1908. Her mother, Clara Mays, was a homemaker, and her father, Stewart Mays, was a postal worker. After graduating from McKinley High School in 1925, Apilado attended Chicago Teachers College, where she earned her teaching certificate in 1928.

After becoming a teacher, Apilado was hired by the Chicago public schools, and she worked as an elementary school teacher until 1973. During that time, she was exposed to the world of magazine publishing, having spent 1942 as the editor of the Negro Youth Photo Scripts Magazine (NYPS). Following her retirement from the Chicago public schools, Apilado returned to the publishing world, founding America’s Intercultural Magazine (AIM), in 1973. The magazine, published quarterly, was founded to help purge racism from society and to establish a scholarship fund for underprivileged youth.

Today, Apilado is an associate editor of AIM, and regularly contributes to the magazine. Her son, Myron Apilado, former vice president of minority affairs at the University of Washington, Seattle, serves as the editor and publisher. Her contributions to society have been documented as far back as the Chicago Tribune in 1940, and more recently in N’Digo magazine and People You Should Know with Harry Porterfield.