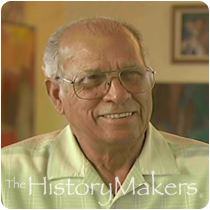 See how Rusty Burns is related to other HistoryMakers
Donate Now

Tuskegee Airman and flight instructor Rusty Burns was born Isham Albert Burns, Jr. on July 24, 1925 in Charity Hospital in New Orleans, Louisiana. Burns developed his love for aviation in the fifth grade at Corpus Christi Catholic School. In 1939, he moved to Los Angles, California with his family where he studied aeronautics at Jordon High School. At age sixteen, he worked at Burbank Airport while learning about aircraft, theory of flight, navigation and meteorology. In 1942, Burns passed the federal aviation exam. After receiving his diploma in 1943, he was inducted into the United States Army at Fort MacArthur and was sent to Kessler Field in Biloxi, Mississippi. After completing basic training, he became a certified pre-aviation cadet.

Burns received his aviation training at Tuskegee Institute and Air Base where he graduated in 1944 as a single engine pilot making him one of the youngest of the Tuskegee Airmen. During his time at the Tuskegee Institute, he received twelve hours of college classes a day in addition to his training as a soldier. Burns trained on several aircrafts including the BT-13 and the AT-6. He successfully completed his training in September of 1944 and became a member of the 99th Fighter Squadron at Godman’s Field in Kentucky. Burns’ military career ended in June of 1945 as World War II ended. He returned to Los Angeles and joined the United States Postal Service where he worked for nine years.

Burns returned to aviation after buying and rebuilding his own airplane. In 1955, he opened Rusty’s Flying Service and began giving flight instruction, at Compton Airport. He became one of the only Tuskegee Airmen in Los Angeles to return to an aviation career. He trained over five hundred students before selling his business in 1971 to become an aviation consultant. He consulted for several companies in the private sector including Teledyne, Rocketdyne, Rockwell and North American Airlines. He retired in 1988 after developing a travel service program for the United States’ government.

Burns lives with his wife in California and has four children including author, Khephra Burns.

Burns was interviewed by The HistoryMakers on October 7, 2005.

See how Rusty Burns is related to other HistoryMakers
Donate Now
Click Here To Explore The Archive Today!