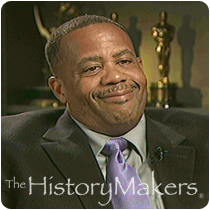 See how Russell Williams, II is related to other HistoryMakers

In 1970, Williams attended the American University where he earned his B.A. in film production and literature in 1974. While pursuing his B.A., in 1973, Williams began working as an audio engineer for WRC/NBC-TV. He then moved to WMAL-TV (now WJLA-TV) and worked there from 1975 to 1976. Williams returned to work at WRC-TV from 1977 to 1978. In 1978, Williams formed his company, Sound Is Ready. He then transferred to work at WMAL/ABC Radio as an engineer and editor. Williams moved to Los Angeles in July of 1979, where he attended the University of Sound Arts, studying sound mixing and earned a certificate in electronics.

After moving to Los Angeles in 1979, Williams began working as the sound mixer for various films including Making the Grade (1984); In the Mood (1987); Billionaire Boys Club (1987) and The In Crowd (1987). In 1988, Williams won a prime-time Emmy Award for Outstanding Achievement in Sound for Terrorist on Trial (1987). In 1990, he won an Academy Award for Best Achievement in Sound for Glory. In 1991, Williams made history when he won another Academy Award for his contribution as a sound mixer for Dances With Wolves, making him the first African American multi-Academy Award winner.

During the 1980s and 1990s, Williams did the sound recording for several films and made for television movies including Field of Dreams (1989); The Distinguished Gentleman (1992); Boomerang (1992); Waiting to Exhale (1995); How to Make an American Quilt (1995); Run for the Dream: The Gail Devers Story (1996); 12 Angry Men (1997), which he won another prime-time Emmy Award for Outstanding Achievement in Sound; The Negotiator (1998); The Temptations (1999), which he earned a prime-time Emmy Award nomination for Part One of this miniseries for Best Sound; Rules of Engagement (2000); Life (1999); Training Day (2001); and The Sum of All Fears (2002). Williams also received accolades as a sound recordist for the civil rights documentaries, Eyes On The Prize: Bridge to Freedom and Eyes On The Prize: Fighting Back in 2006.

In 2002, Williams was hired as Artist in Residence at his alma mater, The American University. He has also taught at Howard University, University of California, Los Angeles and the University of Southern California.

Williams is married to Rosalind Williams and has two children from a previous marriage: Myles Candace Williams and Khemet Ellison Williams.

Williams was interviewed by The HistoryMakers on September 26, 2007.

See how Russell Williams, II is related to other HistoryMakers
Click Here To Explore The Archive Today!