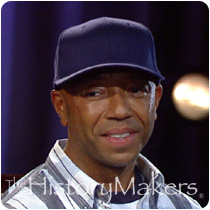 See how Russell Simmons is related to other HistoryMakers

Russell Simmons' career has taken him from the streets of Queens to the heights of the music business and beyond. Starting out as a fledgling hip-hop producer, Simmons has gone on to build an empire that includes music recording and publishing, clothing, movies as well as Broadway. Simmons' name is synonymous with success, and he shows no signs of stopping.

Born in Jamaica, Queens, New York, in 1957, Simmons' parents were active in the arts and in the civil rights movement. His father, a schoolteacher, frequently wrote poetry, and his mother was a recreation director for the New York City Department of Parks and was also a painter. At the age of eight, Simmons' family moved to the Hollis neighborhood of Queens, where the adolescent Simmons became involved with drugs and joined a street gang called the Seven Immortals. His time as a gang member ended a few years later, following the murder of one of his fellow gang-members by a rival group.

In 1975, after graduating from high school, Simmons went on to attend the City College of New York in Harlem. While there, he met Rudy Toppin, who gave Simmons the nickname "Rush," and brought him into the world of music promotion and hip-hop introducing him to the sounds of Eddie Cheeba. Simmons left college during his senior year to become a full-time promoter, but no one attended his first show and he found himself broke. His father, quite angry with him, urged him to return to school, but his mother quietly gave him $2,000. This loan held his production company, Rush Productions, afloat until Kurtis Blow, Simmons's first act made it big, first doing shows with hip-hop pioneer Grandmaster Flash and later becoming the first rap artist to get signed to a record label.

In 1983, after establishing Kurtis Blow and riding the crest of the hip-hop revolution, Simmons, his younger brother Joey, and two friends, Darryl McDaniel and Jason Mizell, formed what would become one of the most influential groups in rap history, Run-D.M.C. Unlike many other groups at the time, Run-D.M.C. maintained an urban look and sound, rather than trying to mold themselves to the image of rock and R&B stars. This image, combined with their lyrics and beat, helped them become the first rap act to appear on MTV. In 1984, Simmons met Rick Rubin, a student at New York University and a fan of punk rock music who was heavily influenced by the hip-hop scene. Together, they partnered to form Def Jam Productions, and got the rock band Aerosmith into the studio with Run-D.M.C. to record a remix of Aerosmith's hit "Walk This Way."

CBS agreed to distribute albums produced by Def Jam in early 1985, and the next four years saw the meteoric rise of Simmons and the acts that he produced, including the Beastie Boys, L.L. Cool J, Public Enemy and Slick Rick. They produced hit after hit, including "(You Gotta) Fight for your Right (To Party)," "I Need a Beat" and "Children's Story." With the albums getting constant radio play and Def Jam's break into the predominantly rock and roll MTV, Simmons organized a series of festival tours of hip-hop acts, bringing their sounds to new audiences across the country.

Having already been labeled by the Wall Street Journal as the "mogul of rap" in 1985, Simmons decided to move into Hollywood. A semi-fictional film of his life had been featured in the film Krush Groove and so, Simmons, along with partner Rubin and Run-D.M.C., decided to give filmmaking a chance, and in 1988, they released Tougher Than Leather, a film starring Run-D.M.C. which received limited release in New York City but garnered widespread attention around the country.

In the late 1980s, Rubin left Def Jam, and the label began feeling pressure from Sony (CBS) over profits. Under threat of losing his company and best artists to Sony, Simmons made a deal with PolyGram Records in 1995.

The early 1990s saw Simmons partner with Stan Lathan, and from this collaboration came Def Comedy Jam. Simmons brought in largely unknown comics from around the country and used the show as a vehicle to help launch their careers, while at the same time expanding his own empire into television. Many of those early comedians are stars today, including Martin Lawrence, Cedric the Entertainer and Chris Tucker. Simmons also returned to filmmaking, acting as producer for Eddie Murphy's hit, The Nutty Professor.

In 1992, Simmons launched his own clothing and apparel line the formation of Phat Farm. Later, his wife, Kimora, expanded on the line with the creation of the women's line, Baby Phat. As part of this enterprise, he has also launched a financial enterprise with the RushCard and the Baby Phat RushCard.

Continuing to enter into new arenas, Simmons launched Def Poetry Jam, a poetry slam series on HBO, as well as Def Poetry on Broadway, which won a 2003 Tony Award for Special Theatrical Events. Recently, Simmons has entered the world of politics, forming the Hip-Hop Summit Action Network, which works to promote social and economic justice among today's youth. Simmons is active in the arts community through the Rush Philanthropic Arts Foundation, which he founded with his brothers Danny and Joseph, as well as getting into the beverage industry with the Russell Simmons Beverage Company and its Def Con 3 energy drink. Throughout his career, Simmons has continued to reinvent himself and to branch out into new fields, always staying true to the hip-hop roots that he holds dear. Tonight, let us salute Russell Simmons.

See how Russell Simmons is related to other HistoryMakers
Click Here To Explore The Archive Today!