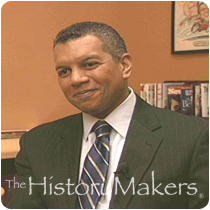 See how Russ Mitchell is related to other HistoryMakers

CBS Newscaster Russ Mitchell was born Russell Edward Mitchell on March 25, 1960, in St. Louis, Missouri. In 1966, Mitchell’s family moved to Rock Hill, a St. Louis suburb. After a positive experience in a high school journalism class, Mitchell received the opportunity to work at St. Louis’ ABC-TV affiliate, KTVI-TV, where he remained for a year gaining experience in television news. In 1979, Mitchell began attending the University of Missouri, and was accepted into the university’s journalism school as a junior. In 1982, Mitchell graduated with his B.A. degree in journalism.

In 1982, Mitchell’s professional broadcasting career began at KMBC-TV in Kansas City, where he worked as a reporter trainee. In 1983, Mitchell moved to Dallas, Texas, where he served as the education and general assignment reporter for a morning news show called "Daybreak" at WFAA-TV. Mitchell moved back to St. Louis in 1985 where he worked as a full-time reporter for KTVI-TV; his two years at the station were spent producing an acclaimed series on the violent street gangs of neighboring East St. Louis, Illinois.

In 1987, Mitchell became a weekend anchor and daily reporter for CBS’s affiliate in St. Louis, KMOV-TV, where he would remain for five years. Mitchell was awarded the Best Reporter honor from Missouri’s United Press International in 1989, and one year later, his wife, Erica, gave birth to his first daughter. In 1992, Mitchell moved from KMOV to CBS’s news team, working as an anchor for the network’s news program "Up to the Minute", which covered stories from across the world. In 1993, Mitchell became a news correspondent for CBS’s "Eye to Eye" program, and spent time covering the United States operations in Haiti.

Mitchell became a Washington correspondent in 1995 and covered the GOP National Convention. Mitchell was the co-anchor of CBS’s "Saturday Early Show" in 1997 alongside Tracy Smith; that same year, he would receive an Emmy Award for his coverage of the crash of TWA Flight 800. In 1999, Mitchell joined the "CBS Evening News Saturday Edition" team, and in 2002, he became a correspondent for CBS’s "Sunday Morning" program. In 2007, Mitchell was hired as a hard news anchor for CBS’ "Early Show".

See how Russ Mitchell is related to other HistoryMakers
Click Here To Explore The Archive Today!