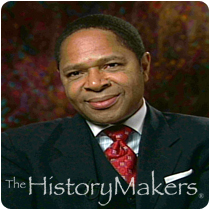 Favorite Color:
Red
Favorite Food:
Catfish
Favorite Time of Year:
Summer
Favorite Vacation Spot:
Bermuda
Favorite Quote:
I Am The Master Of My Fate, I Am The Captain Of My Soul.

Favorite Color:
Red
Favorite Food:
Catfish
Favorite Time of Year:
Summer
Favorite Vacation Spot:
Bermuda
Favorite Quote:
I Am The Master Of My Fate, I Am The Captain Of My Soul.

See how Rufus Williams is related to other HistoryMakers
Donate Now

Accountant and Chicago Board of Education President Rufus Williams, Jr. was born on December 30, 1956 in Chicago, Illinois to Dicye Belle and Rufus Williams, Sr. Williams was raised in a household of six children in the North Lawndale and West Garfield Park communities on Chicago’s Westside. During his childhood, he attended Crown Elementary School and Dvorak Elementary School before graduating from Morton Upper Grade Center. In 1974, he graduated from Orr High School where he was a member of the school’s basketball team.

Without the finances to pay for a higher education, Williams postponed his plans of attending college to work at a fast food restaurant. He eventually earned enough money, received a scholarship and with the help of his parents, enrolled at Southern University in Baton Rouge, Louisiana. In 1978, he graduated magna cum laude with his B.S. degree in accounting in 1978. Williams was then hired as a certified public accountant for Arthur Anderson & Company. He worked there until 1988 when he became the corporate audit manager for the Baxter Healthcare Corporation. Williams later went on to work for Harpo Entertainment Group as a senior manager. There, he was instrumental in establishing the operational structure and financial management of Harpo Studios. Oprah Winfrey then encouraged him to follow his dreams of becoming an entrepreneur. In 2000, Williams founded Olympus LLC and began providing business management, contract negotiations and career development sources. His clients consisted of a variety of entertainers and athletes including veteran baseball player Gary Sheffield.

Williams was appointed to the Chicago Public School (CPS) Board in 2005 and served on the board of trustees of the CPS Teachers Pension and Retirement Fund before succeeding Michael Scott as the school board president in 2006. As president, Williams has helped to form the Charitable Fund for Inner-City Athletic Equipment, a fund that provides athletic shoes to CPS student athletes from low income families. In 2007, Williams launched Real Men Read which was designed to encourage a love of literacy in young boys, while encouraging long lasting school-community partnerships.

In addition to serving as president for the Better Boys Foundation, Williams has served as Vice Chairman and Treasurer of the Board of Trustees of Providence-St. Mel School and as the president of the Local School Council of Whitney M. Young Magnet High School.

Williams was interviewed by The HistoryMakers on February 22, 2008.

See how Rufus Williams is related to other HistoryMakers
Donate Now
Click Here To Explore The Archive Today!