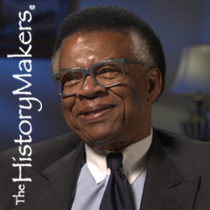 See how Rufus Cormier is related to other HistoryMakers
Donate Now

Lawyer Rufus Cormier was born on March 2, 1948, in Beaumont, Texas to Rufus Cormier and Katie Cormier. Cormier attended Hebert High School, where he played football with Jerry LeVias. Both Cormier and LeVias received full athletic scholarships to play football at Southern Methodist University in Dallas, Texas, where Cormier was named outstanding lineman in the 1968 Bluebonnet Bowl. Cormier graduated with honors, earning his B.A. degree in anthropology in 1970. Cormier then received his J.D. degree from Yale University Law School in 1973.

Cormier began his legal career at the law firm of Paul Weiss, Rifkind, Wharton, & Garrison in New York. During his time there, Cormier was hired as a special assistant to John Doar, the lead counsel to the House Judiciary Committee for the Nixon Impeachment Inquiry. In 1974, he joined the law firm of Baker Botts LLP, becoming not only the first African American lawyer to be hired as a partner at a major Houston law firm, but also the first African American partner at a major corporate law firm in the State of Texas. After thirty-nine years with Baker Botts LLP, Cormier retired in 2013.

In addition to his law practice, Cormier served on numerous boards. He was appointed to Texas Southern University's Board of Regents in 1991. He also served on the board of directors for the Memorial Hermann Healthcare System, the board of visitors for the M.D. Anderson Cancer Center, the board of directors of the Center For Houston’s Future, the executive board of SMU School of Law, and the board of directors for the Gulf Coast Legal Foundation, among others. Cormier was also honored for his professional and volunteer work. He received the Leon Jaworski award from the Houston Bar Association Auxiliary, the Anti-Defamation League’s Karen H. Susman Jurisprudence Award, and the Silver Anniversary Mustang Award from Southern Methodist University. He was also named one of The Best Lawyers in America, and a Super Lawyer by both Texas Monthly and Law and Politics magazines.

Rufus Cormier was interviewed by The HistoryMakers on November 30, 2016.

See how Rufus Cormier is related to other HistoryMakers
Donate Now