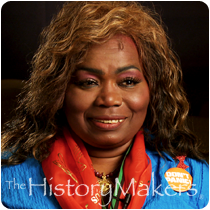 See how Ruby Wilson is related to other HistoryMakers

Singer Ruby Wilson, who would come to be known as the “Queen of Beale Street”, was born in Texas. She moved to Memphis Tennessee and started her professional singing career when she was sixteen years old. Fellow musician B.B. King is her godfather, and Wilson has been one of the house staples at B.B. King’s Blues Club in Memphis, Tennessee.

Wilson has recorded more than ten albums and has performed with other artists such as B.B. King, Isaac Hayes, and Ray Charles. She has had roles in several movies, including The Chamber, The People vs. Larry Flynt, Cookie’s Fortune, and Black Snake Moan, and her music was included in some of their soundtracks. She was also one of the blues musicians included in the documentary film Delta Rising, alongside other blues artists such as Willie Nelson, Chris Cotton, and Morgan Freeman.

Wilson performed at the White House, the New Orleans Jazz and Heritage Festival, and many other prominent venues around the globe. She was honored with the Memphis sound Award for Best Entertainer, the Authentic Beale Street Musician Award, and a Supporter’s Award from the St. Jude Children’s Hospital. Wilson was inducted into the African American Hall of Fame in 2010 and was a member of the Memphis-Shelby County Film & Tape Commission.

See how Ruby Wilson is related to other HistoryMakers
Click Here To Explore The Archive Today!