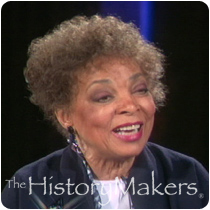 See how Ruby Dee is related to other HistoryMakers
Donate Now

Actress Ruby Dee was born Ruby Ann Wallace on October 27, 1924 in Cleveland, Ohio. Her family soon moved to New York, and Dee was raised during the golden age of Harlem. After high school, she attended New York’s Hunter College, graduating in 1945. Expressive and literate, Dee was drawn to the theatre while still a college student. Dee acted in small Shakespearian productions and landed a role in the play, South Pacific in 1943. She also began to study with the American Negro Theatre, where she would meet her future husband, Ossie Davis. They would fall in love during a cross-country tour of Anna Lucasta.

Ruby Dee’s career as an actress has been nothing short of phenomenal. A petite, intelligent actress of nuance and sensitivity, she was talented enough and lucky enough to garner some of the best roles for black women in the 1950s and 1960s. On stage, she was the first black woman to play lead roles at the American Shakespeare Festival, and won an Obie Award for her portrayal of "Lena" in Athol Fugard's Boseman and Lena; a Drama Desk Award for her role in Alice Childress’ Wedding Band and an Ace Award for her performance in Eugene O'Neil's Long Days Journey Into Night.

Dee has appeared in over fifty films. In 1950, she played Jackie Robinson’s wife in The Jackie Robinson Story and forty years later, she played his mother in the television production, The Court Martial of Jackie Robinson. Her film credits include: A Raisin In The Sun (1961), Uptight (1968), Buck And The Preacher (1972), Roots (1978), Do The Right Thing (1989) and The Delany Sisters: The First Hundred Years (1999). Dee won an Emmy Award for her performance in the Hallmark Hall of Fame production, Decoration Day. Throughout her film and television career, Dee has been selective and has brought that selectivity and dignity to every role she plays. She is particularly proud of her one-woman show, Zora Is My Name, about pioneering novelist, folklorist, anthropologist, Zora Neale Hurston.

Dee and her husband are authors, storytellers and recording artists as well as actors. Her published works include the humorous, My One Good Nerve and various recordings for young people. In 1998, Dee and Davis co-wrote the autobiographical book, With Ossie and Ruby: In This Life Together, in which they take turns telling their stories as actors, activists, a married couple and as parents.

Dee’s life has not all been acting, however. She is a survivor of breast cancer for more than thirty years, and has long been active in a variety of movements. She, along with Davis, traveled to Lagos, Nigeria, as goodwill ambassadors, and eulogized Malcolm X in 1965 and later his widow, Betty Shabazz in 1997.

Jointly presented with The Academy of Television Arts and Science’s Silver Circle Award in 1994, Dee and Davis officially became “national treasures” when they received the National Medal of Arts in 1995. In 2000, they were presented the Screen Actors Guild’s Life Achievement Award. They are inductees in the Theater Hall of Fame as well as the NAACP Hall of Fame. In 2008, Dee was awarded the Screen Actors Guild Award for Best Supporting Actress for her role in the film, American Gangster. She also received an Academy Award nomination for this role.

Dee was interviewed by The HistoryMakers on March 7, 2001.

See how Ruby Dee is related to other HistoryMakers
Donate Now
Click Here To Explore The Archive Today!