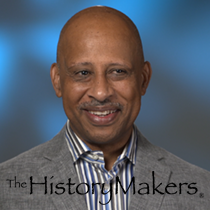 See how Ruben Santiago-Hudson is related to other HistoryMakers

Santiago-Hudson first appeared in the 1988 film, Coming to America. He then played Captain Billy Cooper on the daytime drama Another World from 1990 to 1993. Santiago-Hudson made his Broadway debut as Buddy Bolden in Jelly’s Last Jam in 1992, and starred in August Wilson's Seven Guitars in 1995. He wrote the autobiographical play Lackawanna Blues in 2001, and adapted it into the award-winning 2005 HBO film of the same name. He co-starred opposite Phylicia Rashad in Gem of the Ocean on Broadway in 2004; and, in 2007, he starred in a PBS Nova documentary about the life of Percy Lavon Julian. From 2009 to 2011, he played Captain Roy Montgomery in ABC's Castle. Santiago-Hudson returned to Broadway to star in Stick Fly in 2011, and directed August Wilson’s JITNEY! on Broadway in 2017.

Santiago-Hudson received the 1996 Tony Award for Best Featured Performer in Seven Guitars, and was awarded the 2006 Humanitas Prize in writing for the HBO film adaptation of his play Lackawanna Blues, and the 2009 NAACP Lifetime Achievement Theatre Award. In 2013, Santiago-Hudson won the Lucille Lortel Award for Outstanding Director, an Obie Award for Direction, and was nominated for the Drama Desk Award for Outstanding Director of a Play for the Off-Broadway production of The Piano Lesson. In 2016, he won an Obie Award for Special Citations: Collaboration of the play Skeleton Crew. He also received an honorary doctorate of letters from Buffalo State College in 2006, and Wayne State University in 2015. In 2014, The Ruben Santiago-Hudson Fine Arts Learning Center was named in his honor in his hometown of Lackawanna, New York.

Santiago-Hudson and his wife, Jeannie Brittan, have two children: Trey and Lily, in addition to his two older sons: Broderick and Ruben III.

Ruben Santiago-Hudson was interviewed by The HistoryMakers on August 8, 2016.

See how Ruben Santiago-Hudson is related to other HistoryMakers
Click Here To Explore The Archive Today!