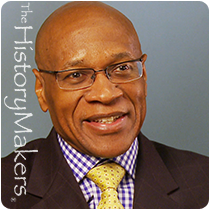 See how Roy S. Johnson is related to other HistoryMakers
Donate Now

Journalist Roy S. Johnson was born on March 19, 1956 in Tulsa, Oklahoma. He attended the prestigious Holland Hall Preparatory School in Tulsa, Oklahoma and went on to graduate from Stanford University with his B.A. degree in political science.

In 1978, Johnson was hired as a reporter for Sports Illustrated. From 1982 until 1989, he worked at the New York Times and the Atlanta Journal Constitution, before returning to Sports Illustrated as a senior editor in 1989. Johnson went on to briefly work for Money, and was then hired as an editor-at-large for Fortune magazine. After a short stint at Fortune, he joined Vanguarde Media, Inc. as an editorial director. In 2001, while working at Vanguarde, Johnson conceived and co-launched Savoy Magazine. In 2003, he returned to Sports Illustrated, where he worked as an assistant managing editor. Johnson was then hired as a consultant for Men’s Fitness magazine, and, in 2007, he was promoted to editor-in-chief. He has also written for many other publications and websites, including Life Goes Strong and ESPN.com.

In 2006, Johnson founded RSJ Media Solutions, a company that offers digital content strategy and media training. He also founded Fit! Live! Win! LLC in 2011, a digital corporate wellness communications firm. In 2012, Johnson founded Write on Essays!, and was named editor-in-chief and executive director of the History Channel’s magazine and the History Channel Club. He has been a frequent television and radio contributor on the topics of sports, fitness, nutrition, wellness and healthy living. Johnson has also served as executive producer of several television programs that have aired on national broadcast and cable networks, including NBC, Fox and TNT. He has co-authored three books: Magic's Touch with Earvin Johnson; Outrageous!: The Fine Life and Flagrant Good Times of Basketball's Irresistible Force with Charles Barkley; and Aspire Higher with Avery Johnson.

Johnson has been a longstanding member of the National Association of Black Journalists, and has served on the board of the International Athletic Foundation. He also created the Roy S. Johnson Foundation, which provides financial assistance to minority youth from his hometown in Oklahoma.

Johnson lives in New Rochelle, NY with his wife Barbara and two children, Edwyn and Missy.

Roy Johnson was interviewed by The HistoryMakers on January 16, 2014.

See how Roy S. Johnson is related to other HistoryMakers
Donate Now
Click Here To Explore The Archive Today!