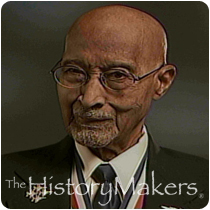 See how Roy Chappell is related to other HistoryMakers
Donate Now

Decorated World War II Air Force veteran and Tuskegee Airman Roy M. Chappell was among a group of African American aviators in the Tuskegee Airmen division that led the way to integrating the armed forces. Born in Williamsburg, Kentucky to Lionel and Flora Chappell, Roy Chappell grew up in Monroe, Michigan, where he was in the top 10 percent of his high school graduating class. In 1940, he left Monroe to attend Kentucky State University, majoring in chemistry. In 1942, during his third year of studies, he was drafted into the armed forces.

In 1944, Chappell underwent navigator training in Hondo, Texas and bombardier training at Randolph Field, Texas. Upon completion, he served as a B-25 bombardier/navigator with the 477th Bombardment Group. In 1945, Chappell was one of the 101 black officers who were arrested for trying to integrate a segregated officers club in what became known as the Freeman Field Mutiny. That same year, Chappell married his wife, Lucy, with whom he had two daughters, Camille and Kathy.

After the war, Chappell completed his education, receiving his B.S. degree in psychology. He went on to become an educator, working as a teacher and guidance counselor in Chicago, Illinois for thirty years, retiring in 1985.

After retiring, Chappell served as the Chicago "DODO" Chapter Tuskegee Airmen President and as the Chairman of the Friends of Meigs Field Board of Directors. On July 25, 2001, Chappell was awarded the Phillips 66 Aviation Leadership Award, recognized as one of the most prestigious civilian aviation awards. Chappell coordinated the Experimental Aircraft Association (EAA) Young Eagles Program and received a Humanitarian Award from the EAA for his efforts. He was also involved with the Chicago Youth in Aviation Project and the Black Star Project of Chicago.

See how Roy Chappell is related to other HistoryMakers
Donate Now
Click Here To Explore The Archive Today!