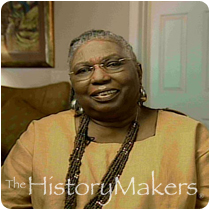 See how Rowena Stewart is related to other HistoryMakers
Donate Now

Stewart was born on March 6, 1932 in Jacksonville, Florida, as the only child of Essie (Brozle) Rhodes and Oliver Rhodes. She grew up in New Berlin, Florida, and graduated in 1955 from Edward Waters College in Jacksonville. She began her career doing social work in settlement houses and reformist-minded community centers in Jacksonville and then in Boston, Massachusetts. In 1975, Stewart became the first director of the Rhode Island Black Heritage Society in Providence. And then, from 1985 to 1992, Stewart served as the Director and Curator of Philadelphia’s Afro-American Historical and Cultural Museum. She transformed what was a rather static museum into one that was interactive. In 1992, Stewart moved to Detroit to head the Motown Historical Museum and three years later, she was recruited to Kansas City, Missouri where she oversaw the development of the American Jazz Museum and became its executive director upon completion in 1997.

In 2002, Stewart retired and moved back home to Jacksonville where she served for a time as President of the A.L. Lewis Historical Society Board and Coordinator of the American Beach Community Center and Museum on Amelia Island north of Jacksonville. She worked as a consultant to museums utilizing historical preservation, presentations and educational programs.

Stewart was the mother of four - Gwendolyn, Clarence, Alvie and Wannetta Johnson.

Stewart was interviewed by The HistoryMakers on October 19, 2006.

See how Rowena Stewart is related to other HistoryMakers
Donate Now
Click Here To Explore The Archive Today!