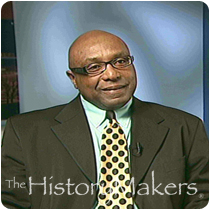 "Good Lord Willing.Don't Count Your Chickens Before They Hatch."

Milwaukee, Wisconsin, television news reporter Roshell “Mike” Anderson was born on September 16, 1952 in Bogalusa, Louisiana, and raised in New Orleans. His mother, Mellenese Magee Anderson moved to New Orleans where she was a cook at The Court of Two Sisters Restaurant. His father, Robert Anderson, was a sergeant in the Korean War. Anderson was raised in the Algiers Church of God in Christ, where he first gained experience in public speaking and singing for an audience. In 1968, he developed a popular impression of Dr. Martin Luther King, Jr.’s “I Have a Dream” speech. Graduating from Clarke High School in New Orleans in 1970, Anderson, known as “Cool Breeze,” patterned himself after Dr. Daddyo, a local radio personality, and CBS-TV news anchor, Walter Cronkite. Anderson attended Louisiana State University and the Career Academy School of Broadcast Journalism in Atlanta, Georgia, graduating in 1971.

Anderson earned his first class license in Atlanta in 1970 and worked at a number of southern radio stations, including WXNS, WKLS, WAOK, as announcer and disc jockey. He has been known as Roshell Magee and General Frank Magee. Anderson developed a singing and song writing career before getting involved with television. His 1972 record, “Snake out of Green Grass” made the Billboard charts followed by “Grapevine Will Lie Sometimes” in 1974. Anderson then took to the concert circuit. He joined WLWI-FM in Montgomery, Alabama in 1978 and switched to rival WXVI-FM in 1979. That same year, Anderson got his start in television at WAPI-TV in Birmingham, Alabama. As a news reporter, “Mike” Anderson covered the tense case of a black woman shot nine times by Birmingham police.

Before joining WISN-TV 12 News in Milwaukee, Wisconsin, Anderson worked as a news anchor and reporter at KIRO-TV in Seattle, Washington. During his tenure at WISN, Anderson has been the recipient of many awards, including his work on the award-winning documentaries Children in the Line of Fire and Solutions to Violence. He has interviewed four American presidents: Richard M. Nixon, George Bush, Bill Clinton and George W. Bush. He is a current member of the Wisconsin Black Media Association.

Anderson lives in Brown Deer, Wisconsin and has three children: Nicole, Mellenese and Michael. When not reporting the news, he is still a professional recording artist; cutting the album, Sweet and Sour Soul in 1988 and Rolling Over in 2006.