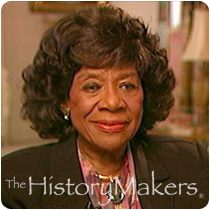 See how Rose Morgan is related to other HistoryMakers

Born in Edward, Mississippi in 1912, Rose Meta Morgan grew up in Chicago. By 1942, she owned and operated the largest African American beauty parlor in the world. Following the business example of her father, industrious former sharecropper Chaptle Morgan, Morgan began making artificial flowers and convincing neighborhood children to sell them door-to-door at 10. Her skills with hair flowered into a business by age 14.

After attending Morris School of Beauty, Morgan rented a booth in a neighborhood salon and began working full-time. In 1938, she styled the hair of singer/actress Ethel Waters and impressed her so much that Morgan was invited to New York City as Waters' guest. Awed by the city's glamour, Morgan moved there and within six months had established enough customers to open her own beauty shop. Soon, she hired five stylists and signed a ten-year lease on a vacant, dilapidated mansion. By 1946, the Rose Meta House of Beauty had a staff of 29, including 20 hairstylists, three licensed masseurs, and a registered nurse.

Morgan opposed notions of beauty, which hold that kinky hair is bad, believing there is beauty in everyone. She began marketing her own line of cosmetics and staging fashion shows. With her ever-increasing success, Morgan bought a new building. In 1955, Rose Morgan's House of Beauty opened in a more stylish setting with a dressmaking department and a charm school in addition to the existing salon facilities. In the early 1960s, she added a wig salon. Over time, she employed and trained over 3,000 people.

In 1965, Morgan was one of the founders of New York's only black-owned commercial bank, the Freedom National Bank. She retired in the 1970s. Morgan continues to exercise every day and care for her health and beauty.

See how Rose Morgan is related to other HistoryMakers
Click Here To Explore The Archive Today!