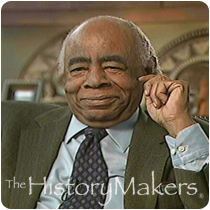 Tony and Emmy award winning theatre, film and television actor Roscoe Lee Browne was born on May 2, 1922 in Woodbury, New Jersey. He attended Lincoln University in Pennsylvania until 1942, when he enlisted in the U.S. Army during World War II. After the war, he graduated from Lincoln in 1946. During this time, he studied French through Middlebury College's summer language program. He received his master's degree from Columbia University, then taught briefly at Lincoln University in Pennsylvania. Browne also found success as an athlete, winning two American indoor championships and setting records in the 800 meters, and winning the 1951 world championship. After a knee injury hampered his athletic career, Browne worked as the national sales representative for Schenley Import Corporation.

He began his acting career with a small role in a 1956 New York Shakespeare Festival production of 'Julius Caesar.' Soon thereafter, Browne became an understudy for Ossie Davis’ performance in 'Purlie Victorious.' Although Browne played the character of Archibald in 'The Blacks,' a play that launched numerous other African American stars, Browne’s career did not take off until his 1963 performance in the off-Broadway play 'Benito Cereno.' He would reprise this role again in both 1965 and 1976. In 1966, Browne performed his own poetry while directing 'An Evening of Negro Poetry and Folk Music.' Browne continued to work actively in theater throughout much of his career, performing August Wilson’s 'Joe Turner's Come and Gone' in 1989 and giving a Tony Award-winning performance in the August Wilson play 'Two Trains Running' in 1992.

Browne also worked in a variety of films, whether as a character actor (in 'Superfly' and 'Uptown Saturday Night') or as a voiceover performer (as the narrator of 'Babe' and 'Garfield: A Tale of Two Kitties'). His television career was prolific and diverse. He received an Emmy award for his recurring role as Dr. Foster on 'The Cosby Show,' a nomination for 'Barney Miller,' and achieved critical acclaim for his work on 'All in the Family' and 'Soap.' His list of television credits included performances in 'Law and Order,' 'E.R.,' 'Will and Grace' and 'New York Undercover.' He also did voiceover work for numerous cartoons, including animated versions of 'Batman' and 'Spiderman.' In addition to his work as a performer, Roscoe Lee Browne wrote short stories, plays, worked as a musical director and was a gifted poet.

Sponsored by The Marmon Group

See how Roscoe Lee Browne is related to other HistoryMakers
Donate Now
Click Here To Explore The Archive Today!