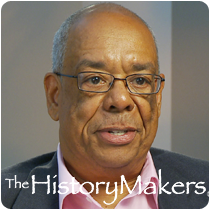 See how Roscoe Giles is related to other HistoryMakers

Physicist and professor of electrical and computer engineering, Dr. Roscoe C. Giles was born in 1949 in Oakland, California. He was raised in Berkeley, California until his family moved to Chicago, Illinois at age four. Giles attended University of Chicago Laboratory Schools from kindergarten to twelfth grade, graduating in 1966. Obtaining his B.A. degree in physics at the University of Chicago, Giles graduated with honors in 1970. Continuing his study of physics, he went on to acquire his M.S. and Ph.D. degrees in physics from Stanford University in 1973 and 1975. Giles was the first African American to earn his Ph.D. degree in physics from Stanford University.

Giles worked as a research associate at Stanford Linear Accelerator Center (SLAC) until moving to the Center for Theoretical Physics at Massachusetts Institute of Technology (MIT) in 1976. In 1979, he became an assistant professor of physics at MIT. He moved to Boston University as an associate professor of electrical and computer engineering in 1985. In 1992, Giles was named Boston University Scholar-Teacher of the Year and he became the deputy director of the Boston University Center for Computational Science. During 1994 and 1995, Giles won Department of Energy Undergraduate Computational Science Education Awards. The Metacenter-Affiliated Resource in the New England Region (MARINER) project was established at Boston University in October 1995. Claudio Rebbi, Glenn Bresnahan, and Giles became co-directors of the National Science Foundation (NSF) funded the MARINER project.

In 1996, Giles won Boston University's College of Engineering Award for Excellence in Teaching. Giles started as a team leader for the Education Outreach and Training Partnership for Advanced Computational Infrastructure (EOT-PACI) in 1997. He co-chaired the Education Program for the Supercomputing 1997 Conference, benefiting a large group of diverse teachers and exposing thousands of conference attendees to the K-12 use of technology. In 1999, Giles was promoted as a full professor to the department of electrical and computer engineering at Boston University. His research focuses on distributed and parallel computer and supercomputer applications, simulations of large scale molecular systems, advanced computer architectures, computational science, and micromagnetics. In 2000, Giles won the Computing Research Association (CRA) A. Nico Habermann Award. The CRA awarded Giles efforts to increase the participation of underrepresented minorities in the computing disciplines, his service as a faculty advisor and mentor for the Minority Engineers Society, and his mentoring of high school, undergraduate, and graduate students. Giles founded and is the executive director of the Institute for African American eCulture which fights hi-tech inequality. During the Supercomputing Conference in Baltimore, Maryland in 2002, Giles was the first ever African American conference chairman. In 2004, the Career Communications Group selected Giles as one of the "50 Most Important Blacks in Research Science." Another NSF collaboration led by Giles was Engaging People in Cyberinfrastructure (EPIC) launched in 2005. Giles became the chair of the United States Department of Energy's Advanced Scientific Computing Advisory Committee (ASCAC) in 2010.

Dr. Roscoe Giles was interviewed by The HistoryMakers on October 12, 2012.

See how Roscoe Giles is related to other HistoryMakers
Click Here To Explore The Archive Today!