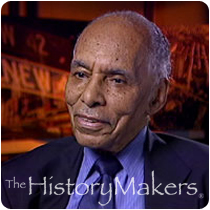 See how Roscoe C. Brown is related to other HistoryMakers
Donate Now

Roscoe C. Brown, Jr., was born March 9,1922, in Washington, D.C. Brown was the youngest of two children, his father working as a public health specialist and his mother as a teacher. After graduating from Springfield College in 1943, Brown joined the Air Force, where he served as one of the Tuskegee Airmen. During World War II, he served as a squadron commander and received the Distinguished Flying Cross. Returning after the war in 1946, Brown attended New York University, where he earned an M.A. in 1949 and a Ph.D. in 1951.

Before Brown earned his master's degree, he worked as a social investigator with the New York City Department of Welfare and as an instructor in physical education at West Virginia State College until 1948. While working on his doctorate in 1950, he became the director of the Institute of Afro-American Affairs and a professor of education at New York University, where he remained for the next twenty-seven years. In 1977, Brown was named president of Bronx Community College, a part of the City University of New York (CUNY), and continued there until 1993. Brown served as director of the Center for Urban Education Policy at the Graduate School and University Center of CUNY.

Brown was active with a number of organizations, including more than thirty years of service to the Boys & Girls Clubs of America. He was also active with the Jackie Robinson Foundation and Libraries for the Future, among many others. Brown was also a founding member of the American College of Sports Medicine.

Active in the media, as well, Brown hosted the television program, African American Legends, and he won the 1973 Emmy Award for Distinguished Program with his weekly series Black Arts. He published numerous articles and contributed to several books, and was the recipient of numerous awards, including the New York City Treasure Centennial Honor from the Museum of the City of New York and the Humanitarian Award from the Boys & Girls Clubs of America. Brown also completed nine New York City marathons. He had four children.

See how Roscoe C. Brown is related to other HistoryMakers
Donate Now
Click Here To Explore The Archive Today!