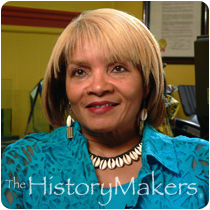 Favorite Color:
Yellow
Favorite Food:
Salad (Caesar)
Favorite Time of Year:
Fall
Favorite Vacation Spot:
Africa
Favorite Quote:
You Get Out Of Life What You Put Into It.

Favorite Color:
Yellow
Favorite Food:
Salad (Caesar)
Favorite Time of Year:
Fall
Favorite Vacation Spot:
Africa
Favorite Quote:
You Get Out Of Life What You Put Into It.

See how Rosalind Juanita Harris is related to other HistoryMakers

Publisher Rosalind Juanita “Bee” Harris was born on March 19, 1950 in Grand Rapids, Michigan to Ruth Smith Boyd and Doyle James. Harris has attended the Davenport College of Business, the Patricia Stevens Career Schools, and the University of Nebraska at Omaha.

From 1975 to 1977, Harris worked as a cartographer for Omaha National Bank. She then became the owner and operator of Salt and Pepper Art Studios from 1977 through 1980, the year she relocated to Denver, Colorado with her two sons. After a brief stint working as a graphic artist for the Rees Printing Company, Harris was employed as a production artist for Colorado Homes and Lifestyles. Then, from 1982 to 1984, Harris worked as a graphic artist for DK Associates/Excel Services at Lowry Air Force Base, in Denver, Colorado. Since 1984, Harris has been the owner and operator of Production Plus/Spectrum Designs. In 1987, Harris became the owner, publisher, and art director of the Denver Urban Spectrum, a free monthly paper which covers stories of interest to people of color and has a distribution of 25,000 in the Denver area. With the launch of their new re-designed Web site, the Urban Spectrum’s primary focus is to connect people to people through their social network, ConnectMe. In 2000, Harris founded the Urban Spectrum Youth Foundation, a journalism program for youth ages 13 to 17. The Urban Spectrum Youth Foundation is designed to educate and train at-risk middle and high school students in the field of journalism. The foundation focuses on literacy and computer training for youth. The Denver Urban Spectrum and the Urban Spectrum Youth Foundation have received honors in journalism from the Colorado Association of Black Journalists including the Overall Excellence Award. Following Hurricane Katrina in 2005, Harris founded Spectrum of Hope, a nonprofit organization that focuses on displaced citizens in the Denver area.

Harris is an engaged member of the Denver community. She is an active member of the Colorado Black Chamber of Commerce, and serves on several boards including the Denver Metro Convention and Visitor’s Bureau, CoLoursTV and Cleo Parker Robinson Dance Company. Past board affiliations include the Girl Scouts Mile Hi Council, the Five Points Business Association, Mothers and Daughters Inc., the Rocky Mountain Women’s Institute, the Metro State College President’s Community Advisory Council, and the Colorado Historical Society’s African American Advisory Council. In addition, Harris was appointed by former Denver Mayor Wellington Webb to serve as a commissioner for Art, Culture, and Film.

Harris is a divorced mother of two adult sons and two grandsons.

Harris was interviewed by The HistoryMakers on November 6, 2008.

See how Rosalind Juanita Harris is related to other HistoryMakers
Click Here To Explore The Archive Today!