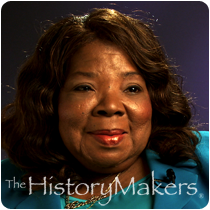 See how Rosalind Ashford Holmes is related to other HistoryMakers

Singer Rosalind Holmes was born on September 2, 1943, to John and Mary Ashford in Detroit, Michigan, although her parents separated when she was very young. As a child, Holmes sang in church choirs and learned how to dance in local centers, and in high school, she sang in her glee club and mixed choir. In 1957, Ashford auditioned for Edward “Pops” Larkins at the local YWCA in Detroit. Larkins was in search of a new girl group to compliment his already established male group. Rosalind, along with Annette Beard, Gloria Williams, and Martha Reeves, became The Del-Phi’s; they performed at the YMCA, YWCA, high school functions, teas, lawn parties and private events. In 1961, The Del-Phi’s released “I’ll Let You Know” on the Chess Records label subsidiary Checkmate. The record was unpopular, and two follow up records also failed to bring attention to the group.

In 1962, Williams left the group, and the remaining trio became Marvin Gaye’s background singers on singles like “Stubborn Kind of Fellow” and “Hitch Hike.” In September of that same year, Motown president Berry Gordy signed Reeves and her background singing partners to the label as Martha and the Vandellas. Just one year later, "Come and Get These Memories" became the Vandellas’ first hit single, reaching number six on the Billboard R&B Singles Chart. A few months later, the Vandellas’ second hit, “(Love Is Like a) Heat Wave,” was released, peaking at number four on the Billboard Hot 100 and number one on the Billboard Hot R&B chart. In 1964, the group continued their success with perhaps their most famous single, "Dancing in the Street," which was soon followed by “Nowhere to Run” in 1965 and “Jimmy Mack” in 1967.

In 1968, Holmes left Martha and the Vandellas, married, and began a career with the Michigan Bell Telephone Company. Ten years later, she joined Reeves and Beard in a reunion performance, and then in 1989, the three original Vandellas recorded "Step Into My Shoes" for Motorcity Records. In 1995, Holmes was inducted into the Rock & Roll Hall of Fame as member of Martha and the Vandellas. Holmes has one son, Damon, two granddaughters, Alana and Kaimen, and one grandson, Damon. She continues to perform today.

Rosalind Holmes was interviewed by The HistoryMakers on June 10, 2010.

See how Rosalind Ashford Holmes is related to other HistoryMakers
Click Here To Explore The Archive Today!