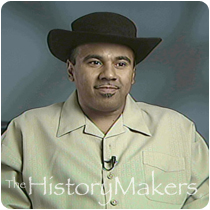 Rodney Dion Baker, who performs as Ronnie Baker Brooks, was born in Chicago on January 23, 1967, to Jeannine Baker and Lee Baker, Jr.—better known as legendary blues singer and guitarist Lonnie Brooks. Brooks has been performing since his ninth birthday, when his father allowed him to join him on stage at Pepper’s Lounge in Chicago to play “Messin’ with the Kid” and “Reconsider Baby.”

After graduating from Hales Franciscan High School in 1985, Brooks worked briefly as a mail clerk before joining his father’s band in 1986. In 1988, Brooks’ work was featured on his father’s album, Live from Chicago—Bayou Lightning Strikes. He later appeared on Lonnie Brooks’ Satisfaction Guaranteed and the Alligator Records 20th Anniversary Tour, during which he had the opportunity to perform with Koko Taylor, Elvin Bishop, and Lil’ Ed Williams. He has since worked with Buddy Guy, Junior Wells, and Keb’Mo’, among other luminaries.

In 1992, Brooks made his debut as a solo performer, substituting for an ill Lonnie Brooks at the New Orleans Jazz and Heritage Festival. In 1998, Real Blues Magazine selected Brooks as the Best New Blues Artist. Since his show at Buddy Guy’s Legends on New Year’s Eve of that year, Brooks has been a solo artist, releasing the albums Golddigger and Take Me Witcha on Watchdog Records, his own Chicago-based label.

See how Ronnie Baker Brooks is related to other HistoryMakers
Donate Now
Click Here To Explore The Archive Today!