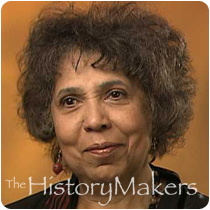 See how Ronne Hartfield is related to other HistoryMakers

Arts administrator Ronne Hartfield was born on March 17, 1936 in Chicago, Illinois to Thelma Shepherd and John Drayton Rone.After graduating from Wendell Phillips High School in 1952, Hartfield (then Rone) went to the University of Chicago. She earned a B.A. in history in 1955. Her first job, doing public relations for the Chicago Children's Choir, gave her a "sense of mission." That sense, as well as her natural energy and enthusiasm, carried over to the rest of her career in which she sought positions through which she could positively affect the arts and society.

In 1969, Hartfield became the project director at Urban Gateways, the largest private arts education organization in the United States. After a successful start there, the School of the Art Institute of Chicago hired her in 1974 as professor of comparative literature and Dean of Students. There, she developed national and international exchange study programs and fellowships, supervised student services and designed and executed assessment studies. She taught at Northwestern University and the University of Illinois, Chicago as well. Seven years later, Urban Gateways lured Hartfield back as the Executive Director. Under her leadership, the organization was designated by the National Endowment for the Arts (NEA) as the national model for artist training and community arts education. She returned to the University of Chicago for graduate studies, earning an M.A. in theology and literature in 1982. In 1991, she began serving the Art Institute as the Executive Director for Museum Education. In this role, she provided interpretive materials and programs for all visitors to the museum. Because of this work, Hartfield is internationally recognized as an expert in arts and multicultural education.

Hartfield continues to consult with the Art Institute on a variety of projects. She serves as a trustee for the Gaylord and Dorothy Donnelley Foundation and the Rhode Island School of Design. She served as a trustee for Chicago's Columbia College and New York's International Sculpture Center for five years and has worked as a consultant for the NEA and the Rockefeller Foundation. She and her husband, Robert Hartfield, have four children.

See how Ronne Hartfield is related to other HistoryMakers
Click Here To Explore The Archive Today!