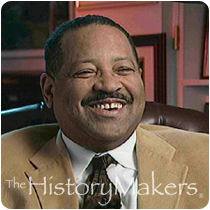 See how Ronald Jewell is related to other HistoryMakers
Donate Now

Ronald Bruce Jewell was born on December 30, 1946, in Newark, New Jersey; due to financial hardship, his family moved from New Jersey to his mother’s native southern Virginia. Jewell's mother was a domestic, his father a mail carrier and restaurateur. In 1966, Jewell earned his high school diploma from Central High School in Goochland County, Virginia, where he played for the basketball team. During his senior year in high school, while working as a school bus driver, Jewell became a husband and a father.

From 1966 until 1969, Jewell attended Virginia Union on a golf scholarship where he majored in history. In 1967, he helped founded the Esquire Club, a national social organization that can be found on Historically Black College campuses throughout the country. From 1969 until 1972, Jewell worked for the National Urban League as the marketing manager of a training program for professional house cleaners. In 1972, Jewell and his second wife, Adrienne, started Jewell Industries, a residential and construction site cleaning service.

In 1973, Jewell expanded the business to include commercial cleaning and, on the request of the American Institute of Architects (AIA), he created the specifications for cleaning commercial properties. In 1976, Jewell began traveling to Ghana, West Africa, familiarizing himself with the people and needs of the country. In 1993, the company was certified under the Small Business Administration’s Section 8(a) Business Development program. In 1994, Jewell Industries started its floor services division after it received a government contract for a carpet installation project. In 1990, Jewell established the African American Trading Company (AATCI), employing 1,000 African farmers to grow and harvest 10,000 acres of chili peppers.

Jewell has received numerous awards for his business and civic accomplishments. His company, Jewell Industries, is recognized as one of the top janitorial firms in the nation.

See how Ronald Jewell is related to other HistoryMakers
Donate Now
Click Here To Explore The Archive Today!