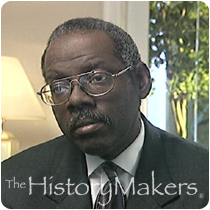 "Can't Make Money If You Don't Spend It."

Photographer Ronald Gilbert Baker was born on June 4, 1949 in Washington, D.C. He and his twin brother, Donald, were adopted as infants by Bernice and Oscar Baker. His mother was a government worker and his father also worked for the government and operated a watch repair business. He was educated in Washington, D.C. public schools and developed a love for orchestrated music in elementary school. In 1963, while a student at Kramer Junior High School, Baker bought his first camera and embarked on his photography career. As a way to “pick up” girls he became the official lunchtime fashion photographer for all of his female classmates. Baker received his high school diploma from Anacostia High School in 1967.

After graduation, Baker worked as a clerk in the Public Affairs office of the Navy Department until 1971. Still grieving over the death of his mother and father, who had died within six months of one another in 1969, Baker and his twin were drafted into the military. From 1971 through 1973, Baker served in the army and was stationed at Fort Knox, Kentucky. Shortly after his honorable discharge from the army and return to the Navy Department, he decided to enroll in Federal City College, now known as the University of the District of Columbia.

He entered the UDC in 1976, majoring in cinematography, photography and mass media. From 1976 through 1994 Baker worked at C and P Telephone Company while still pursuing his photography career. In 1975, Baker published his first photo in The Afro newspaper, a picture of “Miss Black D.C.” In April of 1976, Baker’s career as a celebrity photographer began. He was hired to spend the day photographing musician and Grammy Award winner Van McCoy. Days later Baker was hired by boxing promoter Don King to shoot Muhammad Ali. These two events led to hundreds of assignments with celebrities, politicians and prominent business leaders.

In 1979, Baker self published his first book, Solid Images. His portfolio includes photographs of Michael Jackson, Oprah Winfrey, Bill Clinton, Bryant Gumbel, Colin Powell and Dick Gregory, to name a few. He and wife reside in Largo, Maryland, where he continues to capture priceless images of celebrities. He and his twin brother, also a photographer, are currently working on a book highlighting their work.

Baker was interviewed by The HistoryMakers on June 22, 2004.