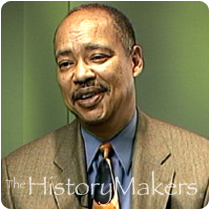 See how Ronald Daly is related to other HistoryMakers
Donate Now

Business executive Ron Daly was born on February 23, 1947, in Chicago, Illinois, the eldest of two children. Daly’s mother was a homemaker and his father a laborer. After graduating from Farragut High School in 1964, Daly went to work for R.R. Donnelley.

As one of the first African Americans to work at Donnelley, Daly continued his education, and, in 1975, earned his associate’s degree from Prairie State University. Two years later, he earned a B.A. degree from Governor’s State College, becoming the first person in his family to graduate from college. Daly continued his education, earning an M.B.A. from Loyola University of Chicago in 1980. He continued to work at R.R. Donnelley, and by the time he left in 2002, he had risen to the position of president of Donnelley Print Solutions, the largest division of the organization. Daly was then named president and CEO of Océ-USA Holding, Incorporated. At Océ, Daly is the first American to run the company’s North American operations, and the first American to sit on the board of directors of the Netherlands-based company.

In addition to a lifetime of dedication to his work, Daly is active in the community as a member of the board of directors of the Chicago Symphony Orchestra, president of the Leadership Group of Chicago and a member of the executive council of Metropolis 2020. Daly and his wife, Delores, have three children.

See how Ronald Daly is related to other HistoryMakers
Donate Now
Click Here To Explore The Archive Today!