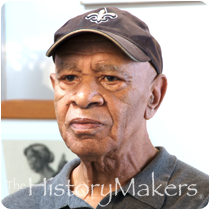 "For A Long Life, Keep Your Mouth Shut And Your Bowels Open."

Printmaker Ron Adams is a former commercial printmaker and current independent artist who has taught at several universities and collaborated with artists such as John Biggers and Judy Chicago. He was born on June 25, 1934, in Detroit, Michigan to Laura and William Adams. Adams took classes at numerous art schools throughout the late 1950s and the 1960s, including Los Angeles Trade Technical College, Manual Arts Adult Night School, Los Angeles City College, UCLA and the University of Mexico. These classes gave him a broad base of experience in technical skills such as drafting, technical illustration, lithography, and engraving, as well as the more standard drawing and painting. He received a certificate of trade proficiency from Otis College of Art and Design in 1963.

Adams used his technical expertise to become a successful commercial printer. In 1968, while studying at the University of Mexico, Adams designed the poster, murals, and motif for the Olympic Stadium in Mexico City. Upon his return to the United States, Adams went to work at the prestigious Gemini G.E.L. printing workshop in Los Angeles, where he quickly moved from the position of assistant printer to that of master printer. In 1973, he left Gemini to work as a master printer for Editions Press in San Francisco. A year later, Adams moved to Santa Fe, New Mexico to found his own printing company, Hand Graphics Ltd. While there, he also worked as a guest instructor in the printmaking department of the University of Texas in El Paso in 1981, and chaired the Santa Fe Committee for Low-Cost Studio Space for Artists in 1985. Adams sold Hand Graphics Ltd. in 1987 and retired from commercial printing to focus on producing his own artwork. He has since served as artist-in-residence at Hampton University in Virginia in 1989 and at Tougaloo Art Colony in Mississippi in 2002.

Adams has been featured in exhibitions at the Museum of Fine Arts in Santa Fe, Loyola Marymount University in Los Angeles, the Frist Center for the Visual Arts in Nashville, the Vanderbilt University Fine Arts Gallery in Nashville, and the University of New Mexico Art Museum in Albuquerque, among others. His work was included in a travelling exhibition of prints and drawings sent to the USSR by the US State Department in 1966. Pieces by Adams appear in the collections of such noted museums as the California Afro-American Museum in Los Angeles, the National Museum of American Art in Washington, D.C., and the Bronx Museum in the Bronx, as well as in the Library of Congress in Washington, D.C.