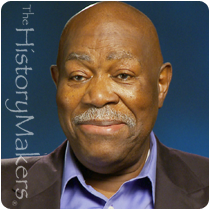 See how Romance Watson is related to other HistoryMakers
Donate Now

Gospel singer Romance Watson was born in Chicago, Illinois on January 4, 1930 to Laura and Amos Watson. He is the youngest of three siblings. Watson graduated Fuller Elementary and Wendell Phillips High School in Chicago in 1943 and 1950, respectively. In 1949, Watson became a member of the gospel music group the Roberta Martin Singers (RMS), led by its venerable namesake, pianist Roberta Martin. He would go on to perform with the co-ed singing group both nationally and abroad, recording gospel standards such as "Old Ship of Zion" (1949), "Yield Not To Temptation" (1947), "He Knows How Much You Can Bear" (1949), "Only a Look" (1949) and the composition, "The Lord Will Make a Way" (1951) for both the Religious and Apollo Records labels. The Roberta Martin Singers would go on to become one of the pre-eminent Gospel groups of the 1940s and 1950s, known for forsaking traditional gospel harmony for compositions that showcased members’ distinct, individual voices. Additionally, the group performed with giants such as James Cleveland and Mahalia Jackson, among many others.

In 1954, Watson relocated from Chicago to Philadelphia and married Phyllis Hoggard a year later. He continued recording with the Roberta Martin Singers, which was under a recording contract with Savoy Records by 1957. He would appear on the group’s first major hit, 1958’s "God Specializes," which featured member Gloria Griffin on lead. Watson left the group and recorded soul music for Coral Records, a subsidiary of the hugely popular British record label Decca Records. In 1959, Watson appeared as a guest on the legendary music program American Bandstand. He would leave music altogether in 1961, accepting a job as a bus operator for the Philadelphia Transportation Company, later subsumed by the Southeastern Transportation Authority (SEPTA).

In the 1990’s, Watson reunited with members of the Roberta Martin Singers, participating in tributes to Martin, who passed away in 1969. In 1991, Watson performed with RMS singers in a tribute concert honoring their founder, which was sponsored by the Smithsonian. Watson also performed with revered Gospel musicians such as renowned singer-songwriter Bill Gaither. Watson has since retired from SEPTA. He and his wife live in Philadelphia and have four adult children.

Romance Watson was interviewed by The HistoryMakers on June 1, 2012.

See how Romance Watson is related to other HistoryMakers
Donate Now
Click Here To Explore The Archive Today!