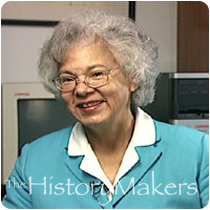 Attorney, Illinois solicitor general and genealogical researcher Roma Jones Stewart was born on August 10, 1936, in Chicago. Although Stewart's father, Sidney A. Jones, became judge of the Circuit Court of Cook County and one of the first African American members of the Chicago Bar Association, she never thought she would become a lawyer. The guests in her childhood home included Paul Robeson and Thurgood Marshall. Stewart attended mostly white Kosminski Elementary School and Hyde Park High School, graduating in 1954. At Fisk University, Edward Pessan taught her and she attended lectures by Dr. Martin Luther King, Jr. and African American women's activist Anna Arnold Hedgemon. She graduated cum laude and Phi Beta Kappa in 1957

Stewart married former husband, Ronald, in 1960 and together they lived with their children in Japan and Burma. Returning to the United States, Stewart entered Georgetown Law School, earning a J. D. in 1972. She clerked for District of Columbia Superior Court Judge Harry T. Alexander in 1973 and moved on to the District of Columbia's Corporation Council as a prosecutor. In 1976, Stewart joined Hudson, Leftwich and Davenport where she handled federal employment discrimination cases, eventually establishing her own practice. Some of her cases include: Love vs. Pullman Co. (1976), Murray vs. Rumsfeld (1981), and Hunt vs. Chicago Housing Authority (1987).

Stewart was appointed director of the Office of Civil Rights of the Department of Health Education and Welfare in 1979. In 1987, she was appointed solicitor general of Illinois by Illinois Attorney General Neil F. Hartigan.

Now, Stewart continues as a civil rights attorney with a profound interest in African American history, especially genealogy. She is past president of the Afro-American Genealogical and Historical Society of Chicago and the author of Africans in Georgia: 1870 and Liberia Genealogical Research.

See how Roma Jones Stewart is related to other HistoryMakers
Donate Now
Click Here To Explore The Archive Today!