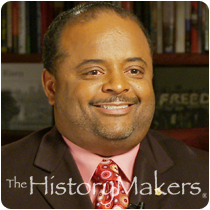 See how Roland Martin is related to other HistoryMakers

Journalist, Columnist, and Commentator Roland Sebastian Martin was born November 11, 1968 in Houston, Texas’ Third Ward, the center of Houston's African American community. Roland’s mother and father where his role-models growing up and his father was an avid newspaper reader and fan of television news. When Roland was 14, he found his passion for communications as he was part of the magnet program in communications at Jack Yates High School. In 1987, Roland attended Texas A&M University on academic scholarship, were he studied journalism and worked for the Bryan-College Station Eagle and for KBTX (Channel 3). As a junior in college Martin pledged Pi Omicron Chapter of Alpha Phi Alpha Fraternity Inc., and attended the National Association of Black Journalist convention.

In 1991 Roland graduated Texas A&M with a B.A. in Journalism and began working at the Austin American-Statesman. Roland eventually left Austin American-Statesman and became a city hall reporter for Forth Worth Star-Telegram. In 1995 he became a morning driver reporter with KRLD radio as sports reporter. During his time at KRLD he won top sports reporting award from the National Association of Black Journalists; and honors from the Houston Press Club. Roland became news editor and morning anchor of KKDA 730 AM radio, as well as editor at Dallas Weekly. In 2000, Roland was working as a freelance producer covering the Democratic National Convention in Los Angeles and suffered a ruptured appendix; his medical bills led him to file bankruptcy.

In 2001, Roland became the first editor of blackamericaweb.com founded by Tom Joyner and married Rev. Jacquie Hood Martin. He returned to radio as a news correspondent for the American Urban Radio Network and as a sports commentator on Washington, D.C., radio station WOL's "Fifth Quarter Program.” He also launched the ROMAR Media Group in Dallas, and became news editor for the new Savoy magazine. In 2007 Roland made his first appearance on CNN (later joins as contributor) and Fox television’s conservative-oriented O’Reilly Factor and wrote a column that was picked up by the nationally distributed Creators Syndicate and ran in the Detroit News, Denver Post, and Indianapolis Star. In 2004 Roland was hired as a consultant by the Chicago Defender and served as a radio talk show host for WVON-AM in Chicago. Roland has published three books and is named top 50 pundits by the Daily Telegraph in the United Kingdom. In 2008 he earned his masters degree in Christian Communications from Louisiana Baptist University. He is two time winner of the NAACP Image Award for Best Interview for “In Conversation: The Michelle Obama Interview,” and for “In Conversation: The Senator Barack Obama Interview”. Ebony Magazine has selected Roland as one of the 150 Most Influential African Americans in the United States three times in a row. Currently he works as host and managing editor of “Washington watch with Roland Martin”, and recently launched “Roland a Fresh Perspective for the 21st Century” on rolandmartin.com.

Roland Martin was interviewed by The HistoryMakers on May s, 2012.

See how Roland Martin is related to other HistoryMakers
Click Here To Explore The Archive Today!