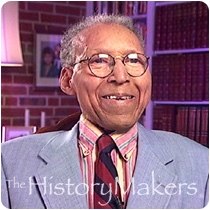 See how Roland C. McConnell is related to other HistoryMakers

Professor of history and author Roland C. McConnell was born in Amherst, Nova Scotia, Canada on March 10, 1910. His parents, A.M.E. Reverend Thomas Benjamin McConnell of Kingstree, South Carolina, and Helen Viola Halfkenny McConnell met in Canada. McConnell attended Riverside School in Elkin, West Virginia and Garnet-Patterson Middle School in Washington. McConnell graduated from Dunbar High School in 1927, where he was a classmate of historian Sadie I. Daniels and Dr. Robert C. Weaver. McConnell earned his A.B. degree in 1931 and his M.A.. degree in 1933 from Howard University, where Charles Wesley introduced him to Carter G. Woodson, founder of the Association for the Study of Negro Life and History (now ASALH).

After graduating, McConnell taught at Elizabeth State Teachers College before joining the United States Army in 1942. In 1943, McConnell served as visiting lecturer at Howard University and archivist at the National Archives. Under the tutelage of Dr. Ralph Betts Flanders, McConnell was awarded his Ph.D. from New York University in 1945.

Arriving at Morgan State University in 1948, McConnell became chairman of the Division of Social Science from 1953 to 1955, chairman of the Department of History from 1967 to 1975 and Professor Emeritus in 1981 and Carter G. Woodson Scholar in Residence. McConnell taught history in a department with Dr. Benjamin Quarles and contributed articles to The Journal of Negro History, The North Carolina Historical Review, The Maryland Pendulum, and the Afro-American and Baltimore Sun newspapers. His book, Negro Troops of Antebellum Louisiana, A History of the Battalion of Men of Color is still widely referenced.

In addition to his writings and teaching, McConnell served as chair of the Maryland Commission on Afro-American History and Culture from 1972 to 1984 and was the recipient of the Meritorious Plaque from the State of Maryland and Morgan State University. He was presented with a trophy from ASALH’s Journal of Negro History and ASALH’s Mary McLeod Bethune Service Award. With his late wife, Catherine Taylor McConnell, he was guest editor for the spring and summer 1991 edition of the Journal of the Afro-American Genealogical Society. McConnell’s latest work is an illustrated history of his beloved Morgan Park neighborhood in Baltimore.

McConnell was interviewed by The HistoryMakers on June 10, 2004.

See how Roland C. McConnell is related to other HistoryMakers
Click Here To Explore The Archive Today!