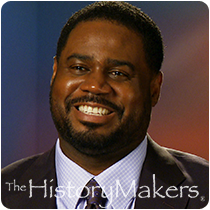 Favorite Color:
Blue
Favorite Food:
Fruit
Favorite Time of Year:
Summer
Favorite Vacation Spot:
London, England
Favorite Quote:
The Truth Is What It Is And What It's Not.

Favorite Color:
Blue
Favorite Food:
Fruit
Favorite Time of Year:
Summer
Favorite Vacation Spot:
London, England
Favorite Quote:
The Truth Is What It Is And What It's Not.

See how Rodrick Dixon is related to other HistoryMakers

Opera singer Rodrick Dixon was born on June 22, 1966 in Queens, New York. Dixon attended the Mannes School of Music and graduated with his B.M. degree in 1989 and his M.M. degree in 1991. During each summer while at the Mannes School, Dixon also studied at L’Academia Musicale Ottorino in Assisi, Italy and l’Ecole d’Art Americain-Palais de Fontainebleau, France.

Dixon trained in the Lyric Opera Center for American Artists, where he appeared in many productions, most notably as the Prince in the 1992 world premiere of Bright Sheng’s The Song of Majnun. Other notable operatic debuts were with the Portland Opera Les Contes d’Hoffmann (1995); the Columbus Opera’s world premiere of Vanqui as Prince (2000); the Virginia Opera as Sportin’ Life in Porgy & Bess (2000); the Michigan Opera Theater as Tonio in La Fille Du Regiment (2005); and the Todi Music Festival as Lenski in Eugene Onegin (2007). Under the baton of Maestro James Conlon, he debuted at the Cincinnati May Festival (2005); the Los Angeles Opera in Tannhauser (2007); the filming of Der Zwerg (2008); and the Ravinia Festival with the Chicago Symphony Orchestra (2011). Dixon’s orchestral debuts include: the Chicago Symphony Millennium Park (2004), May Festival (2005), Philadelphia Orchestra (2008), the Los Angeles Philharmonic in the title role of Stravinsky’s Oedipus Rex (2009) and Atlanta Symphony (2010). He then joined the Metropolitan Opera roster for Armida (2010-2011) and Rodelinda (2011). From 1998 to 2013, Dixon performed with the Tenors Cook, Dixon and Young (formerly of the Three Mo’ Tenors), filming multiple PBS-TV specials and touring the U.S.

In 2002, Dixon and his wife, opera singer, Alfreda Burke, performed in “Too Hot to Handel: The Jazz-Gospel Messiah” at Chicago’s Auditorium Theatre and the Detroit Opera House. Other performances by Dixon and Burke include PBS specials Hallelujah Broadway (Prague, 2010) and Miss World 2012 from Inner Mongolia, China. They have appeared as regular guest artists in Old St. Patrick Church’s (Chicago) production, Siamsa na nGael, at Symphony Center and Deck the Halls Christmas Concerts. In 2013, Dixon and Burke co-produced and recorded the new show,Songs of a Dream, with the Auditorium Theatre for a U.S tour.

Dixon received a number of grants, scholarships and awards, including the Richard F. Gold Career Grant from the Shoshana Foundation, the Jan Peerce Scholarship, Links Foundation Scholarship, a multi-year grant from the Osceola Foundation and the Mary Dawson Art Guild “Tenor of the Year” Award (1991). He has served as a consultant with the Cincinnati Symphony and Old St. Patrick’s Church (Chicago), and been on several boards including the Chicago 2016 Olympic Bid Committee (Arts and Culture Advisory Committee).

Opera singer Rodrick Dixon was interviewed by The HistoryMakers on August 20, 2013.

See how Rodrick Dixon is related to other HistoryMakers
Click Here To Explore The Archive Today!