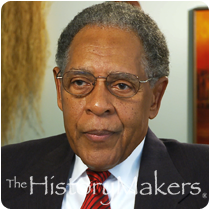 See how Rodney Reed is related to other HistoryMakers

Educator Rodney Reed was born on May 16, 1932 in New Orleans, Louisiana to Ursul and Edgar Reed. He received his B.A. degree from Clark College in 1951, and his M.Mus. degree in music education from the University of Michigan in 1956.

Upon graduation, he accepted a position at Southern University as an assistant professor of music and associate conductor of University bands. In 1961, Reed moved to Oakland, California, where he served as a junior high school music teacher and department head and principal of the summer music recreation program in the Oakland Unified School District before becoming Vice Principal of King Junior High School.

Reed graduated from the University of California, Berkeley in 1970 with his Ph.D. degree in educational policy, planning, and administration. He then joined the faculty of the University’s Graduate School of Education, becoming only the second tenure track professorial appointment in the school’s history at that time, and ascended the ranks to become a full professor. In 1973, Reed was appointed as assistant research educator, Program in International Education Finance, during which time he conducted studies in Liberia, West Africa. In 1976, he was appointed as chair of the division of education administration in the school of education, and in 1989, was elected for a three year term as chair of the university’s Graduate School of Education faculty.

While at Berkeley, Reed served on two Academic Senate Committees; was a co-founder of the University’s Professional Development Program; was an initial member of the Board of Directors of the Young Musicians Program; co-director of the University of California/Oakland Unified School District Teacher Corps Project; and founded the University’s Annual Institute for School Administrators.

In January, 1990, he assumed the position of Pennsylvania Professor of Education and Dean of The College of Education at Pennsylvania State University and became that University’s first black senior academic administrator. While at Penn State, he was elected to serve a two-year term as chair of the academic council of deans. In 1994 he officially resigned from the University of California, Berkeley and was named professor emeritus. In 1998 he retired as dean of Penn State and was awarded the title of dean and professor emeritus, College of education.

Reed has published numerous articles examining the education system in America and has served on the editorial boards of a number scholarly journals. From 1991 to 1994 he was host of the television program, Touching the Future. He has served in leadership positions in the American Educational Research Association, and on the board of directors of the American Association of Colleges for Teacher Education, the San Francisco-Bay Area Urban League, and the National Association of Secondary School Principals. He was also a member of the Pennsylvania Governor’s “Pennsylvania 2000” board to chart the future of education in that state.

He has received many awards including resolutions from the California Assembly and the California Senate, the State of California Speaker of the Assembly Willie J. Brown Jr. plaque for his service to the educational system of California, and the 1992 Alumnus of the Year Award from the Black Alumni club of the California Alumni Association. In addition, The Rodney J. and Vernell A. Reed scholarship in urban education has been established in the Pennsylvania State University College of Education.

Reed is married to Vernell Auzenne Reed. They have two adult children: Karen and Ursula.

Rodney Reed was interviewed by The HistoryMakers on March 8, 2011.

See how Rodney Reed is related to other HistoryMakers
Click Here To Explore The Archive Today!