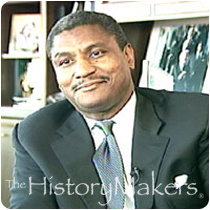 See how Rodney E. Slater is related to other HistoryMakers

Lawyer Rodney Slater was born on February 23, 1955, in Tutwyler, Mississippi. By the age of six, Slater was picking cotton with his mother in order to earn money for a bicycle, and he continued to pick cotton throughout his youth to supplement the family income. He attended Eastern Michigan University on a scholarship, where he was captain of the football team and star of Eastern Michigan's national championship forensic team, graduating in 1977. He went on to attend the University of Arkansas School of Law, earning a J.D. degree in 1980.

Slater became an assistant Attorney General upon graduation from law school, and he remained in that position until 1982. It was during that time that he met then-governor Bill Clinton. In 1983, Clinton named him one of his assistants, where he worked first in the economic and community affairs areas, and then later as special assistant for community and minority affairs. In 1987, Clinton named Slater to the Arkansas Highway Commission, where he became chairman in 1992. During this time, Slater served as director of government affairs for Arkansas State University. Following the election of Clinton as President of the United States, Slater was named the director of the Federal Highway Administration, and in 1997, he was named Secretary of Transportation, a position he held until the end of the Clinton administration. Today he is with the law firm of Patton Boggs LLP.

Slater is involved in numerous civic organizations, including the Arkansas Children’s Hospital Community for the Future, the Boy Scouts of America and the Sickle Cell Anemia Foundation, among others. He has been named one of the “100 Most Influential Black Americans” by Ebony, and has received an Albert Schweitzer Leadership Award and an honorary doctorate from Howard University. Slater and his wife, Cassandra Wilkins, have two children.

See how Rodney E. Slater is related to other HistoryMakers
Click Here To Explore The Archive Today!