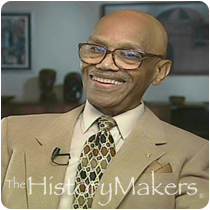 See how Roderick Pugh is related to other HistoryMakers

Clinical psychologist Roderick Wellington Pugh was born on June 1, 1919, in Richmond, Kentucky. Pugh moved with his family to Dayton, Ohio when he was eleven years old. There, his father was one of several black doctors who lived in and served Dayton’s Westside community. Pugh graduated from Dayton’s integrated Steele High School in 1936. He attended Fisk University and graduated cum laude in 1940. Pugh went on to earn his masters degree in psychology from the Ohio State University in 1941. Pugh taught briefly at Albany State College in Georgia. He then enlisted in the U.S. military and attained the rank of 2nd Lieutenant under General George S. Patton. He served in Germany before returning to the United States. Back home, Pugh studied psychology under Dr. Carl Rogers at the University of Chicago, where he made the Honor Society in psychology. Pugh obtained his Ph.D. degree in 1949.

Pugh worked for a time as chief of psychological services at Hines V.A. Medical Center. Pugh also served as a professor of psychology at Loyola University Chicago from the 1960s until his retirement. Pugh has written extensively on African American issues in psychology and psychotherapy. His articles have been featured in several publications, the majority of them dedicated to African American issues in psychology and psychotherapy. Pugh’s most recognized work is his Psychology and the Black Experience, published in 1972, which was widely used in college classrooms.

A member of the American Psychological Association and the Illinois Psychological Association, Pugh served as a diplomat for the American Board of Professional Psychologists. An esteemed international orator, Pugh has given numerous speeches internationally in a variety of places, including Chung Chi College in Hong Kong, Fisk University in Tennessee, and the University of Ibadan in Nigeria. He was a longtime resident of Chicago’s Hyde Park community, but often returned to Dayton’s Wayman A.M.E. Church to visit friends and family.

Roderick Pugh was interviewed by The HistoryMakers on December 16, 2005.

See how Roderick Pugh is related to other HistoryMakers
Click Here To Explore The Archive Today!