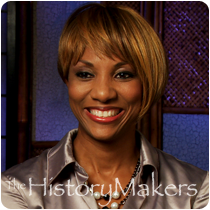 See how Rochelle Stevens is related to other HistoryMakers

Track and field athlete and fitness center entrepreneur Rochelle Stevens was born on September 8, 1966, in Memphis, Tennessee to the Reverend Beatrice Holloway-Davis. She attended Melrose High School and took to running competitively at an early age. By the time Stevens graduated high school, she was a TSSAA high school State Champion, a National High School All-American, a city champion, and an AAU Junior Olympics National Champion. She attended Morgan State University on a full track scholarship and received her B.S. degree in telecommunications and sales from that institution. She went on to receive an M.S. degree in public relations from Columbus University and then began her professional track career in earnest, coached by her mother who had also been a college track star.

After her first attempt in 1988, Stevens qualified for the Olympics and went to the Olympic Games in 1992, in Barcelona, Spain. She won the silver medal for her performance in the women’s 4x400 meter relay race and came in sixth in the world in the solo 400 meter race. At the next Olympic Games, held in Atlanta, Georgia, in 1996, Stevens competed in the women’s 4x400 meter race again and this time took home the gold medal.

Upon returning home to Memphis, Stevens founded the Rochelle Stevens Health and Wellness Spa, where she developed exercise, diet, and therapeutic programs. She also started and continues to sponsor the Rochelle Stevens International Track Invitational Meet, which is designed to expose high school students to college recruiters and formal track competitions. The event is certified to qualify runners for the junior Olympics, senior Olympics, and the Olympic trials.

Stevens retired from professional track competitions in 2000, and began substitute teaching and then serving as a behavioral specialist at Cherokee Elementary School, which she once attended. She has worked as a spokeswoman and motivational speaker for many Fortune 500 companies, including Nike, Maybelline, Blue Cross Blue Shield, and the Bank of America. Stevens is a member of the Better Business Bureau, the Black Business Association, the National Speaker Bureau, and the Word of Life Ministry.

See how Rochelle Stevens is related to other HistoryMakers
Click Here To Explore The Archive Today!