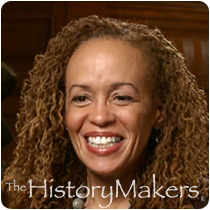 See how Robin Stone is related to other HistoryMakers
Donate Now

Journalist Robin D. Stone was born in Detroit, Michigan in 1964. Her mother, Ora L. Hughes, worked for the U.S. Postal Service in Detroit. Her father, Lawrence R. Stone, was a building contractor. Stone graduated from Michigan State University with her B.A. degree in journalism in 1986. She is completing her M.A. degree in health arts and sciences at Goddard College in Vermont.

Stone first worked as a copy editor for The Oakland Press and the Detroit Free Press. She then served as layout-makeup/slot editor at The Boston Globe for one year, and then as a copy editor for The New York Times from 1990 to 1993. After briefly serving as special projects editor for Family Circle Magazine, Stone was named deputy living editor at The New York Times in 1994. As deputy living editor, she was integral in developing the prototype for the paper’s current Dining In/Dining Out section. In 1997, Stone joined Essence magazine, where she was first hired as a senior editor and eventually promoted to executive editor. Under her stewardship, the magazine earned awards from Folio, the National Association of Black Journalists, the New York Association of Black Journalists, and the Congressional Black Caucus, among other organizations. Stone became founding editor-in-chief of Essence.com in 2000, and, from 2005 to 2007, she served as deputy editor at Health magazine. After leaving Health in 2007, Stone worked as a freelance writer and editor, focusing primarily on issues related to health, parenting, and families. Her thesis work explores Black women, body image, weight, and self-care in the face of racism, sexism and other stressors.

Stone is the author of No Secrets, No Lies: How Black Families Can Heal from Sexual Abuse, which was published in 2004. She also edited and contributed the afterword to My Times in Black and White: Race and Power at the New York Times, the memoir by her late husband, Gerald M. Boyd, who was former managing editor of The New York Times. Stone’s writing has appeared in The New York Times, Essence magazine, Glamour magazine, The Boston Globe, and other publications.

From 2002 to 2003, Stone was a Kaiser Media Fellow, where she researched and reported on sexual abuse in Black families and other health issues. She has taught magazine editing and production at New York University, and advanced reporting at the City College of New York. She is a board member of Greenhope Services for Women, a residential drug treatment center for formerly incarcerated women, and a New York Alumnae member of Delta Sigma Theta Sorority, Inc. Stone served as vice-president/print for the National Association of Black Journalists (NABJ), and as president of NABJ's New York chapter. Her career and contributions to journalism garnered her an Outstanding Alumni Award from her alma mater, Michigan State University, in 2004.

Stone and her fiance, Rodney Pope, live in New York, New York. She has a teenage son, Zachary Boyd.

Robin Stone was interviewed by The HistoryMakers on October 6, 2014.

See how Robin Stone is related to other HistoryMakers
Donate Now