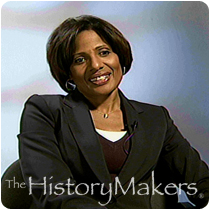 See how Robin Robinson is related to other HistoryMakers

Local Emmy Award winning television anchor Robin Carolle Robinson was born on August 4, 1957, in Chicago, Illinois, to Louie and Mati Robinson. Robinson was the second youngest in a family of six children. As a child, she was fascinated by her father’s skills as a journalist, especially his ability to type quickly. In 1960, Robinson’s father was promoted to West Coast editor of Ebony magazine, and her family relocated to Pomona, California. Then, in 1963, her family moved to Claremont, California, where Robinson was one of the first African Americans to integrate the predominantly white Claremont High School.

After graduating from high school, Robinson went on to attend San Diego State University where she pursued her B.A. degree in journalism. She then worked for KGTV in San Diego. In 1981, Robinson was hired as an anchor by WBBM-TV, Chicago’s CBS affiliate. She worked there until 1987, when she joined the staff of WFLD-TV Fox News Chicago. As an anchorwoman for Fox, Robinson received numerous awards, particularly for her coverage of the Great Chicago Flood and the funeral of Cardinal Joseph Bernardin.

In 1995, Robinson became a spokesperson for the Child Abuse Prevention Series. In 1997, after her older brother Greg passed away, she helped produce a series on heroin addiction. Robinson is a member of the National Association of Black Journalists and the Chicago/Midwest Chapter of the National Academy of Television Arts and Sciences, and serves on the board of directors of South Central Community Services, Inc.

See how Robin Robinson is related to other HistoryMakers
Click Here To Explore The Archive Today!