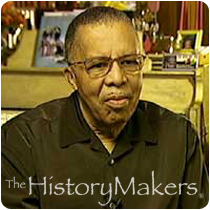 See how Robert Wooten, Sr. is related to other HistoryMakers
Donate Now

While a student at Morgan Park High School, Wooten organized a gospel choral group, the Morgan Park Crusaders, in 1945. After graduation, Wooten was stricken by a serious illness and hospitalized for a year. After recovering from his illness, Wooten devoted his life and musical talent to serving his faith; in July 1949 he founded the Wooten Choral Ensemble, based at Beth Eden Baptist Church. Wooten received his B.S. degree in music education from the Chicago Musical Conservatory in 1956, and earned his M.S. degree in the same field from Roosevelt University in 1968.

The Wooten Choral Ensemble boasted more than sixty members, and traveled extensively to perform and preach the gospel. Its hallmark through the years was expressing a spiritual message through anthems, hymns, black spirituals, and gospel sounds. Wooten's group recorded several albums and appeared on many local radio and television programs.

Outside of the church, Wooten enjoyed a distinguished career as an educator. At Parker High School, Wooten led the school's choir to citywide fame and rose to the rank of assistant principal before becoming a district administrator. Wooten worked with the Chicago Board of Education until his retirement in 1994.

For his contributions to gospel music, Wooten received many awards and recognitions. Wooten accepted an honorary doctorate from Virginia Seminary College in 1983, and was recognized at the Chicago Gospel Festival in 1994 for his contributions to religious music. Wooten and his wife, Frances, were married in 1956; the couple raised three children.

See how Robert Wooten, Sr. is related to other HistoryMakers
Donate Now
Click Here To Explore The Archive Today!