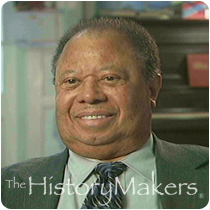 See how Robert Winfrey is related to other HistoryMakers
Donate Now

Robert Winfrey, musician, composer, music teacher, musical arts director and choral director, has revolutionized the musical scene and music education in Boston, Massachusetts over a twenty-eight year period. A builder of a multi-cultural school music program in Boston, Winfrey made music education available to all students at the high school level. In addition to his work in the city of Boston, Winfrey served as the director of the world-renown Kuumba Singers of Harvard University for twenty-five years. His signature composition, Let’s Build A City, is known and has been sung across the United States.

Winfrey was born in Atlanta, Georgia in June 1933. His parents, Pete and Ethel Winfrey, and two sisters, Frances and Betty lived in the Grady Holmes Housing Project during Winfrey’s growing up. He was a neighbor of Martin Luther King, Jr.’s.

Winfrey graduated from David T. Howard High School in 1950 and from Morehouse College in 1955 with a degree in music composition. During his youth, he played piano and organ at Liberty Baptist Church, two blocks from Ebenezer Baptist Church.

From 1955 to 1957, Winfrey served in the U.S. Army as a minister of music to the chaplains of all faiths – Catholic, Protestant and Jewish. During his military service, he decided to become a music teacher.

In the summer of 1957, Winfrey studied music composition at Columbia University in New York City. Then, in the fall, he became the choral and band director at Hubbard elementary and high schools in Forsyth, Georgia. He returned to Columbia University in 1960 and earned his M.A. degree in music composition. For the next eleven years, he taught and directed the music program at Dunbar High School in Lynchburg, Virginia. In Lynchburg, Winfrey met Reverend Virgil Wood, pastor of Diamond Hill Baptist Church, and became Diamond’s organist and minister of music. In 1970, he received a Tangley Oaks Fellowship for graduate studies in music education at Columbia University where he developed an arts program for inner-city youth. Reverend Wood moved to Boston in 1963 and influenced Winfrey to join him in 1971. Winfrey reluctantly left Georgia with his wife Johnie (Evans) Winfrey and their two sons, Robert, born in 1968, and Peter, born in 1970.

In Boston, Winfrey taught music at Jeremiah Burke High School and directed Boston’s Model Cities’ “Teen Town” community arts program. At Burke, he established for the first time a choral ensemble and a band. Quickly his reputation and talent for developing singing groups spread across greater Boston. In 1975, the Boston Public Schools established a citywide music program, which became the Roland Hayes School of Music at Boston’s Madison Park Campus High School. Winfrey was appointed to plan and develop the Hayes School of Music and he served as its director from 1977 to 1999.

In 1972, Reverend Wood asked Winfrey to compose an original song for a Black Expo sponsored by the Boston chapter of Reverend Martin Luther King, Jr.’s Southern Christian Leadership Conference (SCLC). The result was Let’s Build A City, in which he changed ‘City’ to ‘Nation’. The theme of this Winfrey composition was so impressive and important, that it was used in the inaugural ceremonies of three former big city mayors, Maynard Jackson of Atlanta, Thomas Bradley of Los Angeles and Coleman Young of Detroit. In 2005, Winfrey shared the message of this composition with the cities of Mobile, Alabama; Biloxi, Mississippi; and New Orleans, Louisiana after the devastation caused by Hurricane Katrina. The mayors of Mobile and Biloxi sent letters of appreciation to Winfrey for his thoughtful composition.

In 1973, Harvard University asked Winfrey to serve as the director of the Kuumba Singers. Under Winfrey’s direction, the Kuumba Singers performed in cities and towns across America – including public and private schools, colleges, churches, cathedrals, concert halls, hospitals, nursing homes and prisons. In 1981-1982, the highlight of that tour season for Winfrey was their performance in King Chapel at Morehouse College -- Winfrey’s alma mater.

In 1983, Winfey was chosen as one of Greater Boston’s Black Achievers. At the awards ceremony, the Kuumba Singers performed in his honor. Winfrey’s greatest awards are the legions of students who are now achievers in both musical and non-musical endeavors.

See how Robert Winfrey is related to other HistoryMakers
Donate Now
Click Here To Explore The Archive Today!