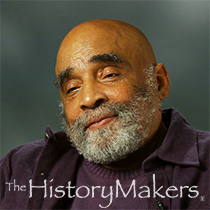 See how Robert Tutman is related to other HistoryMakers
Donate Now

Cameraman and producer Robert Tutman was born on October 15, 1946 in Baltimore, Maryland.

Tutman initially worked as a still photographer until 1968, when he was hired as a cameraman for NBC’s WBAL-TV in Baltimore. In 1970, Tutman moved to CBS Network News in Chicago, Illinois, becoming the company’s first African American cameraman. For the next twenty-five years, Tutman covered national and international news stories for CBS. He also taught as an associate professor at Columbia University in 1973 through the Michelle Clark Minority Fellowship.

From 1995 to 1999, Tutman served as a senior cameraman for Chicago’s WBBM-TV, where he worked on breaking news stories, from hard news to feature pieces, documentaries, special projects and long format programs. In 1996, Tutman established his own production company, and, from 1999 to 2001 he produced fifty half-hour programs and twelve three-hour specials for the Chicago Public Schools. He went on to serve as a producer for Monument City Films in Baltimore from 2001 to 2002; and, in 2003, became a producer for WYCC-TV, a PBS station based in Chicago. Tutman later worked as director of photography for The Africa Channel and as a producer at Chicago Film Works. His film credits include The Providence Effect and Common Enemy.

Tutman’s honors include Emmy Award nominations as well as the Gold Camera Award, which he received during the 1996 Chicago Industrial Film Festival for his work on Common Enemy. He has also served as president of the Chicago chapter of the National Association of Black Journalists. He lives in Chicago, Illinois.

Robert Tutman was interviewed by The HistoryMakers on October 22, 2014.

See how Robert Tutman is related to other HistoryMakers
Donate Now
Click Here To Explore The Archive Today!