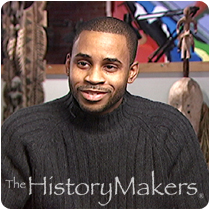 See how Robert Stull is related to other HistoryMakers
Donate Now

Robert “Rob” Stull is an accomplished comic book artist. In the design of comic book pages he is known as an inker—drawing the characters and scenes with black ink before the coloration is added. He has worked for every major publisher in the comic book industry.

Born on February 2, 1967 in Boston, Massachusetts, Stull grew up and attended public schools in nearby Brookline, Massachusetts. He began drawing at age four and was encouraged throughout his childhood and youth by his mother Patricia Ryder and his father Donald Stull. Stull began his professional career after graduating form the School of the Boston Museum of Fine Arts in 1989. At Stulldesign / Ink on Paper, he worked with several companies in Boston and New York, providing services ranging from graphic design to art direction.

Stull is also the creator and curator of Sequential Art: The Next Step, the first ever gathering of African American comic book artists and the grouping of their art in exhibition format, to demonstrate the presence of blacks in comic book art. Sequential Art is a traveling exhibit spotlighting the contributions to comic book art and popular culture, which has been viewed around the country. The exhibit displayed over 100 works by thirteen mainstream contemporary black comic artists.

Stull was also the co-founder, along with Keron Rant and Chris Walker, of Armanda Design Group, a New York based studio, whose mission was to properly fuse together comic books and hip-hop. The studio produced high quality illustration work for clients such as Virgin Records, Tommy Boy Record, The Fader magazine and Cornerstone. In 2004, Stull taught a two-week “crash course” in Bordeaux, France, at the Carnival des 2 Rives to communicate the language of Sequential Art and have the participants produce work in a deadline fashion just like the comic book artists that work in the industry.

Robert Stull was interviewed by The HistoryMakers on January 28, 2005.

See how Robert Stull is related to other HistoryMakers
Donate Now
Click Here To Explore The Archive Today!