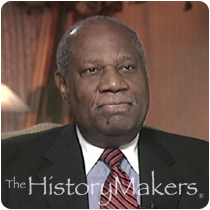 See how Robert Stanton is related to other HistoryMakers

Robert George Stanton was born on September 22, 1940 in Forth Worth, Texas. His mother was a short order cook and his father was a hay contractor. He grew up in Mosier Valley, one of the oldest African American communities in Texas, settled by free slaves. He graduated from I.M. Terrell High School in Forth Worth in 1959.

He earned his bachelor's of science degree from Huston-Tillotson College in Austin in 1963. The summer of his junior year in college he began his career with the National Park Service. Borrowing $250, he bought a train ticket to Wyoming and a park ranger's uniform and worked as a seasonal ranger at Grand Teton National Park. Stanton, along with several other African Americans, was recruited by then Interior Secretary, Stewart Udall who traveled to predominately Black college campuses recruiting students.

In 1963, Stanton began his graduate studies at Boston University and went back to Huston-Tillotson to work as the director of public relations and alumni affairs from 1964 until 1966. That year, he took a full time job with the Park Service as a personnel management and public information specialist in the Washington, D.C. headquarters office. In 1969, he became a management assistant and in 1970, he was appointed superintendent of Virgin Islands National Park in St. Thomas. In 1974, Stanton became deputy regional director of the Southeast Region of the National Park Service in Atlanta and in 1976 he returned to Washington, D.C. as assistant director of park operations. In 1978, Stanton was named deputy regional director of the National Capital Region, where he remained until 1986. In 1987, he returned to headquarters as associate director for operations, and in 1988, he became the first African American to serve as director of the National Park Service. Stanton's nomination for the post by former President Clinton was the first that had to be approved by the U.S. Senate…he was confirmed unanimously. He retired from that position in 2003.

Stanton currently works as an adjunct professor at Texas A&M teaching courses on conservation. He has also taught at Yale University and been the recipient of numerous awards for his civic work and environmental stewardship.

See how Robert Stanton is related to other HistoryMakers
Click Here To Explore The Archive Today!