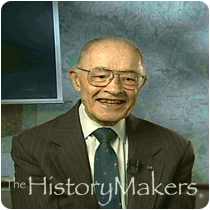 See how Robert R. Lavelle is related to other HistoryMakers
Donate Now

Realtor and banker Robert Roselle Lavelle was born on October 4, 1915 in Cleveland, Tennessee, to Franklin Pierce Lavelle, a pastor, and Mary Anderson Lavelle, a domestic. Lavelle’s father passed away when he was nine years old, and Robert, his mother and his four brothers and three sisters met difficult times during the Great Depression, leading to Lavelle dropping out of high school to work several odd jobs.

In 1935, Lavelle reached a turning point when, while working as a dishwasher in a department store restaurant, he was approached by the president of the black-owned Pittsburgh Courier, who offered him a job. It would be the start of Lavelle’s life-changing twenty-one-year career with the paper, where he worked in the office, mailroom and later, in accounting. Lavelle met his future wife, Adah Moore, while working at the courier. The two wed in 1942. Lavelle left the paper for four years when he was drafted into the U.S. Army during World War II, during which time, the Courier adopted the “Double V” campaign, signifying victory for African Americans at home and abroad. Lavelle pursued his education in night school while working at the Courier, and received both his B.S. and M.A. degrees from the prestigious University of Pittsburgh and the University of Pittsburgh Katz Graduate School of Business in 1951 and 1954, respectively. Lavelle started his own real estate business in 1951, and in 1956, he left the Pittsburgh Courier to work full-time at Lavelle Real Estate. In 1957, Lavelle was made an executive at a savings and loan business. Both Lavelle Real Estate and the savings and loan business focus on the poor black community. Lavelle maintains both of his businesses in the Hill District of Pittsburgh, where he continues to provide loans to black clients who would not otherwise qualify for bank loans.

Lavelle is a longtime member of Grace Memorial Presbyterian Church, where he is an elder, and he also serves on the Board of the Pittsburgh Theological Seminary. He is currently a member of the Board of Visitors at the Katz Graduate School of Business, where the Robert Lavelle Scholarship is named in his honor. In 2008, Lavelle notably switched his voting registration from Republican to Democratic so that he could vote for Barack Obama in the Pennsylvania primary election. He resides in the Hill District of Pittsburgh with his wife, and the couple has two grown sons, Robert Moore Lavelle and John Franklin Lavelle.

Lavelle was interviewed by The HistoryMakers on August 15, 2008.

See how Robert R. Lavelle is related to other HistoryMakers
Donate Now
Click Here To Explore The Archive Today!