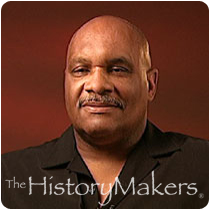 Favorite Color:
Blue
Favorite Food:
Rice
Favorite Time of Year:
Winter
Favorite Quote:
For Someone To Make You Feel Inferior, It Means That You Have Given Them The Liberty To Do That.

Favorite Color:
Blue
Favorite Food:
Rice
Favorite Time of Year:
Winter
Favorite Quote:
For Someone To Make You Feel Inferior, It Means That You Have Given Them The Liberty To Do That.

See how Robert Pickens is related to other HistoryMakers

Robert James Pickens was born on February 2, 1943 to Sarah Wilson and Nathanial Pickens in Chicago, Illinois and grew up in Evanston, Illinois. After graduating from Evanston Township High School in 1962, Pickens was the first African American to represent America in wrestling in the 1964 Olympics. He placed sixth in the Greco-Roman division.

Continuing his career in sports, Pickens played football as an offensive tackle for the Chicago Bears from 1967 to 1969. He earned a B.S. in Business Administration from the University of Nebraska-Lincoln in 1969 and then spent a year playing for the Edmonton Eskimos in the Canadian Football League while working as the Assistant Personnel Director for Foote, Cone and Belding-an advertising agency. In 1970, he began an 18-year career with Sears, Roebuck and Company in which he was eventually promoted to toy department buyer.

In 1988, Pickens left Sears to become the owner and managing director of Rainbow Classics, Inc., a Hong Kong-based trading company dealing in toys and sundry items. In 1991, Pickens became the president and owner of Merrill Associates, Ltd. and the construction coordinator for DJP Development and Consulting, a family-owned business. In addition to his professional duties, Pickens began serving as a Chicago Park District commissioner in 2000.

Pickens never left sports behind: he served as an official for the Big 10 Football Conference between 1976 and 1989, and co-founded a mentoring group of retired professional athletes called Team Up, Inc. in 1985. He held the position of national steering committee president of the National Football League Players Association and president of the National Football League Retired Players Association's Chicago Chapter and worked with youth through the Better Boys Foundation and the Boys and Girls Clubs of America. Pickens had two adult children, and married Judith Jamison in 2002.

See how Robert Pickens is related to other HistoryMakers
Click Here To Explore The Archive Today!