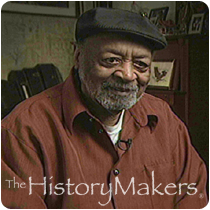 See how Robert Lockwood, Jr. is related to other HistoryMakers
Donate Now

Lockwood’s first instrument was the pump organ, which he began to play as a young child; he later learned to play guitar from his stepfather, legendary blues artist Robert Johnson. Lockwood left school and began his professional career at age fifteen, traveling throughout the Mississippi Delta playing in juke joints and parties with Johnson, harpist Sonny Boy Williamson (a.k.a. Rice Miller), Johnny Shines, and others.

Lockwood made his first recordings in 1941 with Doc Clayton on his famous Bluebird Sessions in Aurora, Illinois. Among the four singles made were Take a Little Walk With Me and Little Boy Blue. Later that year, Lockwood returned to Helena, Arkansas, where he hosted a popular live radio broadcast on station KFFA, sponsored by the King Biscuit Company. Lockwood performed in all of the major blues centers, including Memphis, Tennessee, and St. Louis, Missouri; by the early 1950s he was working as one of the top session artists for Chess Records in Chicago.

In the 1960s, Lockwood moved to Cleveland, Ohio, settling down in the Hough community, where he purchased a home and raised his family. Lockwood's solo recording career began in 1970 with the album Steady Rollin’ Man. In the 1980s, Lockwood and longtime friend Johnny Shines recorded three albums.

Lockwood and his wife Mary lived in Cleveland, Ohio; he passed away on November 21, 2006.

See how Robert Lockwood, Jr. is related to other HistoryMakers
Donate Now
Click Here To Explore The Archive Today!