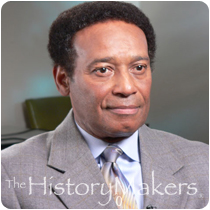 Favorite Color:
Red
Favorite Food:
Fried Chicken
Favorite Time of Year:
Christmas
Favorite Vacation Spot:
Bahamas
Favorite Quote:
If You Have No Confidence In Self, You're Twice Defeated In The Race Of Life. With Confidence, You Have Won Before You Even Started.

Favorite Color:
Red
Favorite Food:
Fried Chicken
Favorite Time of Year:
Christmas
Favorite Vacation Spot:
Bahamas
Favorite Quote:
If You Have No Confidence In Self, You're Twice Defeated In The Race Of Life. With Confidence, You Have Won Before You Even Started.

See how Robert Lewis Harris is related to other HistoryMakers

Lawyer, activist, and business executive Robert Lewis Harris was born to Lucy and Benjamin Harris on March 4, 1944, in Arkadelphia, Arkansas. After moving to California in 1960, Harris, a 1961 graduate of Oakland Technical High School, received his A.A. degree from Merritt College in Oakland in 1963 and his B.A. degree from San Francisco State University in 1965 (in 2007 he was inducted into the university’s Hall of Fame). Harris worked as a probation officer for four years before entering the University of California Berkeley Law School (Boalt Hall). Shortly after Harris’s receipt of his J.D. degree in 1972, he joined the legal staff at Pacific Gas & Electric Co. (PG&E) where he spent thirty-four years as an attorney and business executive, retiring in January 2007.

In 1973, Harris became active with his local bar associations, serving in 1976 as President of the Charles Houston Bar Association (CHBA), an association of Black lawyers in Northern California. He made a name for himself in the legal community by leading a team of Black lawyers who successfully defended the NAACP against libel and slander charges in 1978. A year later, he made history by becoming the first lawyer from the West Coast to ever serve as President of the National Bar Association (NBA). A Founder of the California Association of Black Lawyers in 1977, Harris in 1982 served as a founding member of the board of the National Bar Institute, the funding component of the NBA. Later that year, he became the first President of the Wiley Manuel Law Foundation, the funding component of CHBA. In 1983, he became Chairman of the Legal Redress Committee of Oakland branch of the NAACP, and in 1986, he received the NAACP’s highest legal honor, the W. Robert Ming Award for his advocacy on behalf of the NAACP. Harris has also received the highest honors of Kappa Alpha Psi Fraternity (Laurel Wreath Award) and the NBA (C. Francis Stradford Award).

In 1985, Harris argued and won a landmark corporate free speech case in the U.S. Supreme Court protecting PG&E’s First Amendment rights. In 1987, Harris married Glenda Newell, with whom he had two children. After completing the Harvard Business School’s Advance Management Program in 1988, he began his ascension through the corporate ranks at PG&E, first as Vice President of Community Relations and later as Vice President of Environmental Affairs. In the latter position, Harris expanded and led PG&E’s environmental stewardship endeavors to a new level. Harris has continued his involvement in community issues by serving in the highest ranking positions in Kappa Alpha Psi Fraternity (Grand Polemarch) and in Sigma Pi Phi Fraternity (the Boulé) as Grand Sire Archon-Elect; serving on the board of the Port of Oakland; being involved with the United Negro College Fund of the Bay Area; working with the Lawyers Committee for Civil Rights of the San Francisco Bay Area (Co-Chair); working with the California League of Conservation Voters; working with the American Association of Blacks in Energy (General Counsel); being involved with the African American Experience Fund of the National Parks Foundation; serving on the U.S. EPA National Environmental Justice Advisory Council; working with the California EPA Environmental Justice Advisory Committee; serving on the National Environmental Policy Commission; and being involved with the Oakland African American Chamber of Commerce, among many others.

See how Robert Lewis Harris is related to other HistoryMakers
Click Here To Explore The Archive Today!